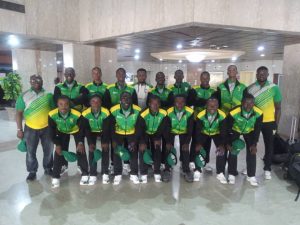 Daniel Gim, coach of the U-19 Men’s cricket team says the team is optimistic of winning the U19 Cricket World Cup Africa Division 2 Qualifiers.
Nigeria is hosting seven others in the tournament beginning on Friday at the Moshood Abiola National stadium, Abuja, with the top three teams earning a spot at the next stage of the qualification.
Gim, while addressing newsmen, assured fans of victory at the event, adding that the players are mentally ready for the competition.
“A lot of hard work has been put in behind the scenes. You can only see how much we have learnt and improved on the pitch of play from Friday.
“We are hosts, we will play to win. We know we will have the support of the home crowd but the players have also been trained mentally to handle pressure where necessary.
“We respect our opponents but we are optimistic of victory,” Gim said.
Also speaking, Ridwan Abdulkareem, captain of the team said the team’s victory at the event would be the team’s gift to the country as it marks her independence.
“We have really worked hard, I believe in the team and the efforts we have put in, hopefully we will win the tournament.
“We will take it one game at a time. Our victory will be our gift to Nigeria as we mark our 62nd independence anniversary,” Abdulkareem said.
Nigeria will begin her campaign against Rwanda in the opening game of the tournament on Friday.
The eight-nation event is expected to end on Oct. 9.
Editor’s Picks  Odioma Crisis: Bayelsa Govt. reads riot act to Council of Chiefs, sets up 6-man committee