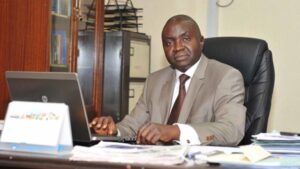 The Centre for the Promotion of Private Enterprises (CPPE) has charged the Federal Government to expedite the process of providing a legislative framework aimed at effectively regulating operations at the ports.

Dr Muda Yusuf, Founder, CPPE, gave the advice in the CPPE half year economic review report on Sunday in Lagos.

Yusuf noted that the move was important to protect the interest of all stakeholders in the port sector.

He also called for port reforms aimed at addressing high cost of operations, tedious procedures, documentation and weak application of technology and extortion.

According to him, scanners were yet to be fully operational at the ports, the single window was yet to take off and weigh bridges were not in existence at Nigerian ports.

Yusuf also urged the government to intervene on trade facilitation issues at the ports.

He said this included sealing of terminals by the Nigeria Customs Service for infractions, working hours by maritime sector operators and airport cargo terminals and the ports dispute resolution system.

He noted that the working hours at the cargo terminals of the international airports and the ports were completely at variance with the demands of the investors.

“We request that in imposing sanctions on terminal operators or other agencies at the ports, innovative ways should be adopted to avoid collateral negative effect on other stakeholders particularly the importers and the exporters.

“The Nigerian Customs Service should therefore review its strategy on sanctions imposition to avoid disruptions of businesses of innocent economic players.

“The activities in our maritime sector are 24-hour activities, therefore, it is imperative for all agencies working at the ports to have operating hours that accommodates the nature and character of the port’s ecosystem,” he said.

Yusuf said over the past six months, the Nigerian economy had been characterised by diverse economic vulnerabilities.

He listed them to include unprecedented surge in energy prices, depreciation and currency volatility, weak fiscal space, acute foreign exchange scarcity, rising public debt and debt service burden and insecurity amongst others.

According to him, all these headwinds have had devastating effects on businesses in the first half of the year.

However, the economy, he noted had continued to demonstrate resilience amid all of these harsh investment environments.

Yusuf noted that the key challenges for industrialists in the first six months of 2022 included lack of access to sugar and resins which were critical inputs for manufacturing.

He added that manufacturers continued to grapple with high cost of logistics, inflation, access to raw materials and the impact of excise duty on alcoholic or non-alcoholic beverages which was impacting demand for their products.

“Also, exports to Economic Community of West African States (ECOWAS) countries are mostly by road through Benin Republic, but Benin Republic has for a few years now been imposing prohibitive transit taxes and levies on transit goods.

“This is making many of these cross-border businesses very unproductive and very unprofitable and a major cause of frustration to many cross-border investors.

“We appeal therefore to the authorities in Nigeria and Benin Republic to resolve whatever issues there is on this matter as the prohibitive fees and levies on transit goods are a clear violation of ECOWAS protocols.

“This does not portend a good omen for our economy integration and the larger issue of the African Continental Free Trade Area because over 80 per cent of trade is by road and this kind of impunity to our transit cargo gives a great cause for concern,” he said.

On the nation’s oil and gas sector, the CPPE boss said that investors in the sector continued to lament the challenges posed by insecurity, oil theft, unstable policies and inappropriate fiscal regimes.

He added that the downstream sector continued to be weighed down by the pricing and subsidy regimes, transparency issues, poor competition and the regulatory environments which dimmed the growth prospects in the sector.

He, however, commended the decision to make the Nigerian National Petroleum Company  (NNPC) Limited  an independent, autonomous organisation.

This proposition, Yusuf said, would unlock the huge investment opportunities in the oil and gas sector for the benefit of all Nigerians.

“It is hoped that the models of Saudi Arabian Oil Company [Saudi Aramco] and the Petrobras of Brazil will be replicated with this transformation.

“We propose a business model that would dilute the ownership of the NNPC with the onboarding of institutional and individual investors.

“We also recommend the decoupling of the management from political interference and controls with the company should ultimately be listed on domestic and international stock markets,” he said.

Yusuf also appealed to the owners and management of E-hailing platforms to be more sensitive to the plight of drivers following their complaints of unfair practices.

He said that their margins were being massively eroded because of inflation and the cost of vehicle maintenance.

“They should have an engagement with them with a view to reviewing and making their operating conditions more humane.

“Many of them have are graduates, they have opted for this service because of the unemployment situation,” he said.