“This raises the risk of stagflation, with potentially harmful consequences for middle- and low-income economies alike,” it said. 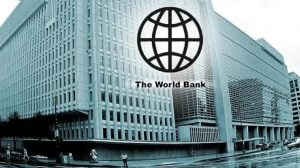 The World Bank says the damage from Coronavirus (COVID-19) and the war in Ukraine have intensified the slowdown in the global economy, leading to a period of weak growth and increased inflation.

This is contained in a statement released on the World Bank website on Tuesday on the bank’s latest Global Economic Prospects Report.

According to the report, in addition to the COVID-19 pandemic is the Russian invasion of Ukraine which it said had magnified the slowdown in the global economy, leading to a protracted period of feeble growth and elevated inflation.

“This raises the risk of stagflation, with potentially harmful consequences for middle- and low-income economies alike,” it said.

The News Agency of Nigeria(NAN) reports that according to Business Insider, Stagflation is an economic condition that is caused by a combination of slow economic growth, high unemployment and rising prices.

The bank said the report revealed that global growth was expected to slump from 5.7 per cent in 2021 to 2.9 per cent in 2022, significantly lower than the 4.1 per cent that was anticipated in January.

“It is expected to hover around that pace over 2023 to 2024, as the war in Ukraine disrupts activity, investment, and trade in the near term, pent-up demand fades, and fiscal and monetary policy accommodation is withdrawn.

“As a result of the damage from the pandemic and the war, the level of per capita income in developing economies this year will be nearly 5 per cent below its pre-pandemic trend,” it said.

The statement quoted the World Bank’s Group President, David Malpass, as saying “The war in Ukraine, lockdowns in China, supply-chain disruptions, and the risk of stagflation are hampering growth.”

Malpass said for many countries, a recession would be hard to avoid.

“Markets look forward, so it is urgent to encourage production and avoid trade restrictions. Changes in fiscal, monetary, climate and debt policy are needed to counter capital misallocation and inequality,” he said.

The statement said the June Global Economic Prospects report offers the first systematic assessment of how current global economic conditions compare with the stagflation of the 1970s.

It laid emphasis on how stagflation could affect emerging markets and developing economies.

” The recovery from the stagflation of the 1970s required steep increases in interest rates in major advanced economies, which played a prominent role in triggering a string of financial crises in emerging markets and developing economies,” it added.

Ayhan Kose, Director, World Bank’s Prospects Group, said “developing economies will have to balance the need to ensure fiscal sustainability with the need to mitigate the effects of today’s overlapping crises on their poorest citizens.

“This will also reduce the amount of policy tightening required to achieve the desired effects on inflation and activity,” he said.

The statement said the report also offered fresh insights into how the war’s effects on energy markets were clouding the global growth outlook.

The report said the war in Ukraine had led to a surge in prices across a wide range of energy-related commodities.

The statement said the report highlighted the need for decisive global and national policy action to avert the worst consequences of the war in Ukraine for the global economy.

It said, “This will involve global efforts to limit the harm to those affected by the war.

“Global efforts to also cushion the blow from surging oil and food prices, to speed up debt relief, and to expand vaccinations in low-income countries.

It said policymakers also should refrain from distortionary policies such as price controls, subsidies and export bans, which could worsen the recent increase in commodity prices.

Economic growth to decline to 3.7% in Sub -Saharan Africa in 2022-World Bank