Royal Dutch Shell cut its dividend for the first time since World War Two on Thursday in a drastic step to preserve cash as it prepares for a protracted slump in demand for oil because of the coronavirus pandemic.

The Anglo-Dutch energy company also suspended share buybacks and said it would reduce oil and gas output by about a quarter after its net profit almost halved in the first three months of 2020 to $2.9 billion.

The new measures combined with cuts in capital spending and planned cost reductions announced last month could save Shell almost $30 billion this year to help it weather the crisis and prepare for the transition to low-carbon energy.

“We are living through a crisis of uncertainty,” Chief Executive Officer Ben van Beurden said. “If we had not cut the dividend … we would have been left without options to reposition the company for the recovery and the future.”

Shares in Shell had slumped 8.2% in London by 1201 GMT, underperforming rival BP which said on Tuesday it was maintaining its first-quarter dividend.

For years, Shell has taken pride in having never cut its dividend since the 1940s, resisting such a move even during the deep downturns in the oil market of the 1980s.

Some investors had called on major oil firms to break the industry taboo around dividends because of the fallout from the health crisis, rather than taking on more debt to maintain payouts.

Shell said it would reduce its quarterly dividend to 16 cents per share from 47 cents, which would save it about $10 billion this year if it stays at that level. Shell last changed its dividend at the start of 2014, raising it from 45 cents.

Shell is the first of the five so-called Oil Majors to cut its dividend because of the coronavirus crisis. Besides BP, Exxon Mobil has also said it will maintain its first-quarter dividend while Total and Chevron have yet to report first-quarter results.

“Shell’s dividend cut has thrown down the gauntlet to the supermajors. BP, Chevron, ExxonMobil and Total are due to pay out $41 billion of dividends in 2020,” said Tom Ellacott, an analyst at Wood Mackenzie. 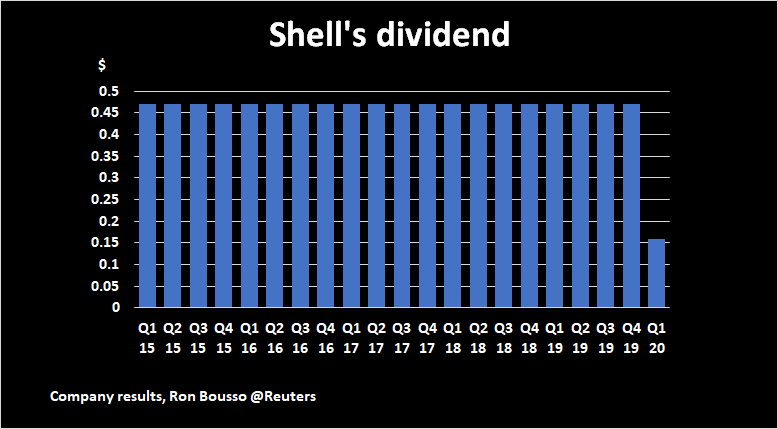 ‘RIPPING OFF THE BAND-AID’

Van Beurden said the dividend cut was a part of a long-term resetting of the company that would also play a core part in Shell’s shift away from fossil fuels.

Oil and gas companies have come under increasing pressure from investors worried about climate change and Shell this month laid out the sector’s most extensive strategy yet to reduce greenhouse gas emissions to net zero by 2050.

“Ripping off the band-aid always hurts but if Royal Dutch Shell’s move today allows more room for alternative energy investments, and facilitates a lower cost of equity, it could be just what the company needs to ensure its long-term health,” said Tal Lomnitzer, a senior investment manager at Janus Henderson Investors.

Wood Mackenzie said the cut meant Shell would be able to generate cash with oil at $36 a barrel, down from $51 previously. Brent crude has fallen 65% so far this year and was trading at about $25 a barrel on Thursday.

For a graphic on Shell’s oil and gas production, click here

Following years of deep cost cuts after its acquisition of BG Group for $53 billion in 2016, Shell had previously planned to boost payouts through dividends and share buybacks to $125 billion between 2021 and 2025.

Global energy demand could slump by 6% in 2020 due to coronavirus lockdowns and travel restrictions in what would be the largest contraction in absolute terms on record, the International Energy Agency (IEA) said on Thursday.

Shell last month said it would reduce capital expenditure this year to $20 billion at most from a planned level of about $25 billion and cut an additional $3 billion to $4 billion off operating costs over the next 12 months.

Van Beurden said he expected the impact of the drop in oil demand to be more severe in the second quarter while Chief Financial Officer Jessica Uhl said the company was bracing for a deeper and longer recession that would extend into 2023.

Shell’s first-quarter net income attributable to shareholders based on a current cost of supplies and excluding identified items fell 46% from a year earlier to $2.9 billion, above the consensus in an analyst survey provided by Shell.

The company said it cut activity at its refining business by up to 40% and expected to cut oil and gas production in the second quarter to between 1.75 million and 2.25 million barrels of oil equivalent per day (boed) from 2.7 million boed in the first quarter. Shell said it did not expect the cuts to be permanent and it would still invest in oil and gas projects.

Shell, the world’s largest fuel retailer with 45,000 filling stations, said its fuel sales could fall up to 54% in the second quarter.

For a graphic on Shell’s fuel sales, click here 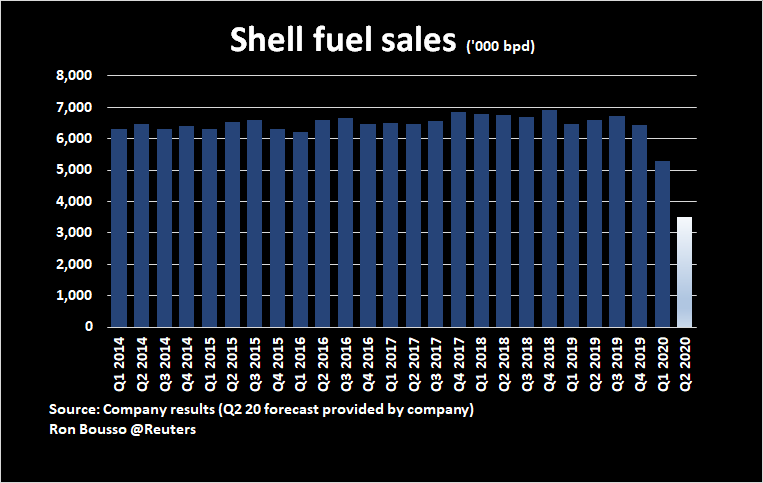 OSCARS 2021: Streamed Films Will Be Eligible For Award Due To COVID-19

Mint Digital Bank Reassures On Commitment To Revitalise The…