Handing over the goats to the farmers, he said that as the ruminants multiply, the economic status of the receivers will definitely improve, and this would have a great positive impact on society. 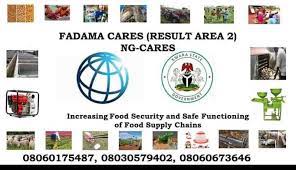 The Kwara State Fadama NG-CARES has flagged off its intervention programme with 408 ruminants (goats) to 102 farmers drawn from Farmer Communities’ Associations in Asa Local Government Area of the state.

The ceremony, which took place at the council headquarters, Afon, on Monday, was the commencement of the fulfilment of Gov. AbdulRahman AbdulRazaq’s resolve to cushion the effects of the COVID-19 pandemic on the poor and vulnerable, as encapsulated in the objectives of the Nigeria COVID-19 Action Recovery and Economic Stimulus.

Represented by Mr AbdulQuawiyu Olododo, his Technical Assistant on Agriculture, the governor explained that the intervention project, which covers crop and livestock inputs and assets, will last for two years and that 20,000 farmers would benefit within the period.

Charging the beneficiaries on proper feeding and handling of the goats, AbdulRazaq assured them that the four goats received by each farmer and which are a fusion of a He-goat and three she-goats, will multiply with time, if they are given good treatment.

Handing over the goats to the farmers, he said that as the ruminants multiply, the economic status of the receivers will definitely improve, and this would have a great positive impact on society.

He stated that the intervention programme is community-based driven, hence, it was brought to the beneficiaries directly, and has no place for favouritism and nepotism.

He highlighted agricultural programmes like tractorisation, rice farming scheme and input subsidy, among other initiatives implemented by his administration to boost food production and enhance safe functioning of food supply in the state.

Earlier, the state Project Coordinator, Dr Busari Isiaka, described the event as a testimony of the governor’s sympathy for the poor and vulnerable.

He said that the occasion spoke volume about the present administration’s responsible and responsive gesture to the yearning of the masses.

Also speaking, the Director, Veterinary Services Department, Ministry of Agriculture and Rural Development, Dr Olugbon Abdulateef, said that the ruminants were from a foreign environment and they would need to be acclimatised to their new domicile.

He encouraged them to call or visit the nearest vetinenary clinic in case of any strange observations.

Some of the beneficiaries expressed gratitude to the governor and pledged their support for his government, which, they said, has immensely transformed the state.

China’s non-manufacturing PMI up in May