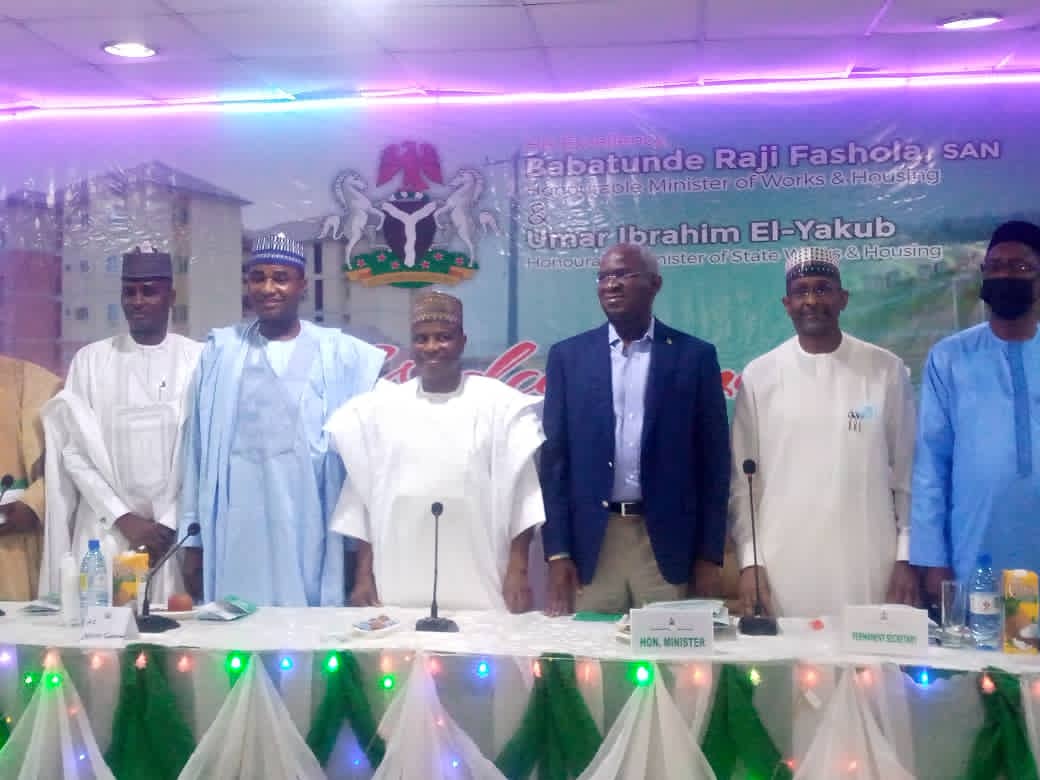 The National Council of Lands, Housing and Urban Development, has urged stakeholders to patronise local raw materials in the construction sector.

This is contained in a communique read by Minister of Works and Housing, Mr Babatunde Fashola SAN, at the end of 11th Meeting of the National Council of Lands, Housing and Urban Development in Sokoto.

The council urged all tiers of governments to access sustainable funding from multinational finance institutions for provisions of affordable q d accessible housing in Nigeria.

Members also urged the Federal Government to form a collaborative mentorship between by world skills international and national experts.

The council advocated for constant training of professional and artisans to reduce shortage in construction industry as well as employment of relevant professionals for effective coordination in the sectors.

The meeting urges the federal government and relevant stakeholders to formulate a national policy on skills development as an important means of addressing economic outlook of communities, disadvantaged youth and people with disabilities.

The council also urged government to recapitalise the Federal Mortgage Bank of Nigeria (FMBN) and build it’s capacity to the standard of similar world class institutions to take charge of housing development, finance and advocacy.

The meeting encouraged governments at all levels to promote community education on appropriate and sample techniques for flood control and water conservation.

Participants also encouraged governments at all levels to participate in National Housing Fund (NHF) schemes and need for viable mortgage system that would strengthen home ownership where rent payment would lead to owning a house.

The council advised state governments and other relevant professionals to collaborate with National Population Commission (NPC) in the forthcoming population and housing census exercise.

Fashola said the recommendations were among the the deliberations made by the participants from the 36 states land and housing ministries, FCT, NGOs, institutions and professional bodies.

The minister said the no fewer than 74 Memoranda submitted were reviewed comprising nine actionable while 65 were formatives.

According to him, the council meeting tagged ” Housing Our People, By All Government and All Our People ” was to adopt policy measures towarda addressing key challenges of the sector for accelerated housing development and job creation.

In a keynote address at opening of the meeting, Fashola commended Sokoto state government led by Gov Tambuwal to supporting the council meeting and acknowledge the developmental projects executed by Gov Tambuwal which have direct bearing in the citizens.

He said the National Housing Programme initiated by the Ministry at the onset of the President Muhammadu Buhari led administration is now delivering on its objective.

” Apart from stimulating the economies of the 34 states and the FCT in the communities where work is being undertaken for the construction of houses, by providing work for artisans, builders, engineers, and other skilled persons in the built industry.

” The construction sites have been and remain centres of supply for building materials and other commodities.

” Many people who hitherto were unemployed have had their dignity restored because they can leave home every day saying to their families ” the Minister said.

He noted that there are others scheme by the Federal Housing Authority (FHA) by way of direct construction in various states, just as the Federal Mortgage Bank has financed the construction of about 6000 housing units at various stages of completion.

” Similarly, the Federal Government has increased its financing intervention support for housing through the Federal Mortgage Bank by increasing the number of mortgages that have been issued and reducing the equity contribution requirement to make it more accessible ” Fashola added.

Earlier in his address, Gov. Aminu Tambuwal of Sokoto state described the meeting as crucial in recognition of the need for government, private sector and bodies to collaborate and approach housing issues for the benefits all people.

Tambuwal noted that housing issues are global concern despite minor variations, successive governments in Nigeria have made efforts address issues on housing challenges.

He urged council to further examine the presentation compile by experts to find reasonable solutions to the challenges of housing delivery.

The News Agency of Nigeria (NAN) reports that permanent secretaries from states led byfFederal ministry of works and housing, Mr Bashir Alkali, Directors, professionals and other dignitaries in housing development assembled within the last three days brainstormed on different issues.