The statement said Georgieva said this while reacting the publication of a Joint International Financial Institutions (IFIs) Plan to address Food Insecurity. 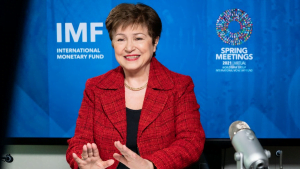 This is contained in a statement, a copy of which was obtained from the IMF website on Wednesday in Abuja by the News Agency of Nigeria (NAN).

The statement said Georgieva said this while reacting the publication of a Joint International Financial Institutions (IFIs) Plan to address Food Insecurity.

Georgieva said Russia’s invasion of Ukraine had created a crisis on top of a crisis around the globe with countries facing food shortages and sharply higher prices for food, energy and fertilizers.

According to her, the pressures occur at a time when countries’ public finances have already stretched from the pandemic and debt burdens are high.

Georgieva said that with inflation reaching the highest levels seen in decades, vulnerable households in low- and middle-income countries were most at risk of acute food insecurity.

She said that history had shown that hunger often triggered social unrest and violence.

“If we have learnt one lesson from the 2007 to 2008 food crisis, it is that the international community needs to take fast and well-coordinated actions to tackle a food crisis.

” I am glad that the heads of the IFIs worked together to propose concrete actions.

She said that the IMF while working closely with the World Bank and other IFIs, would provide policy advice, capacity development assistance, and financial support.

This the managing director said would help further catalyse and complement financing from other institutions.

Georgieva said the IMF was investing in its monitoring capacity to allow for timely identification of countries with the most pronounced financing pressures, especially fragile and conflict-affected states, which would particularly be affected by food insecurity.

“The IMF is working with country authorities on macroeconomic frameworks and policy priorities.

” A critical area of focus is to assist countries in their efforts to rapidly improve social safety nets to protect vulnerable households from the imminent threat of hunger.

“Helping members identify ways to safeguard food security without resorting to export restrictions has been another priority.”

She said that these policy objectives were reflected in the IMF’s programme engagement.

Georgieva said that the IMF financing support for Moldova and Mozambique, for instance, included a focus on strengthening social safety nets for vulnerable households.

“The IMF will also bring to bear its new Resilience and Sustainability Trust, which will provide affordable longer-term financing for countries facing structural challenges.”

According to her, the IMF will also intensify efforts with the World Bank and others to support debt restructurings where needed.

“Following a meeting of IFIs and global leaders convened by the U.S. Treasury on April 19 on “ Tackling Food Insecurity: the challenges and call to action, they have bedn working together to formulate a joint action plan.”

According to the IFIs, the aim is to address food insecurity.

Others are the World Bank, and the International Fund for Agricultural Development (IFAD). .

According to the plan published today, the IFIs will pursue actions to step up, surge, and scale their work across six priority goals which include, support vulnerable people; and promote open trade.

Others are to mitigate fertilizer shortages; support food production now, invest in climate-resilient agriculture for the future, and coordinate for maximum impact.