He said the demands not only affect the time for the execution of the projects, but also its cost. 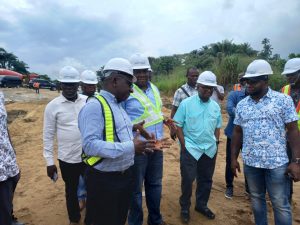 The Federal Controller of Works in Cross River, Mr Bassey Nsentip, has urged communities to support the Federal Government to complete ongoing projects in the state.

Nsentip made the call in an interview with the News Agency of Nigeria (NAN) in Calabar on Monday, alleging that some communities were making unnecessary demands on the government and contractors, thereby stalling the progress of work on the projects.

He said the demands not only affect the time for the execution of the projects, but also its cost.

The controller appealed to the communities to take ownership of the projects, the quality of work being done and completion.

Nsentip particularly made reference to the ongoing dualisation of the Calabar/Itu road where illegal structures were erected on right of way by communities to attract compensation.

“One cannot overestimate the importance of the road to the communities, the state as well as the generality of Nigerians.

“The 87-km Calabar/Itu road is a single carriage way constructed over 50 years ago and the federal government, seeing the importance of the road, decided to reconstruct it by making it a dual carriage road.

“The challenge there now is the structures hurriedly built on right of way by the communities just for the sake of demanding for compensation.

“This matter is slowing down the pace of work of the contractors handling the dualisation job that is scheduled for completion by November 2023.

“My take is that once communities assumed ownership of government projects and see only the economic benefits of such projects to their well being, it will put paid to the seeming delay in execution of projects and also ensure that quality job is done,” he said.

NAN reports that the Minister of Works, Mr Babatunde Fashola, represented by Mr Folorunsho Esan, Director of Construction and Rehabilitation in the ministry, inspected the Calabar/Itu road project on Thursday, saying that funding for the project has been secured.

The project is being funded by the NNPC under the tax credit scheme.