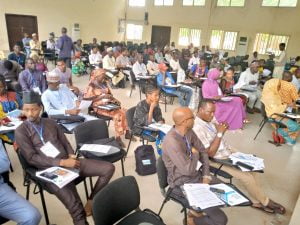 The North East Development Commission (NEDC), in collaboration with Adamawa Government, has begun training for 150 youths on efficient waste management practices and modern methods of recycling.

Speaking at a one-week training on Monday in Yola, Alhaji Shuaibu Audu, Commissioner for Environment, said domestic and industrial wastes had been a major challenge in the environment in the recent time.

Audu, represented by Permanent Secretary of the ministry, Mr Cletus Gotel, said these days wastes had become a source of income generation and job creation.

He congratulated the participants for the opportunity and urged them to actively participate to improve their skills.

Mrs Fatima Bakari, representative of the NDEC, said that the training was part of the series of activities organized by the commission towards addressing environmental challenges in the region.

According to her, waste disposal is a major contributing factor that causes a lot of illness and various forms of diseases in the society.

“Waste, if properly managed, could contribute to better health and even serve as a source of job creation and socio-economic development in our societies.

“You were selected to take part in this training, considering your importance in the society, as we know no society can ever develop without a major contribution from its youth population,” she said.

Dr Muhammad Aminu, a consultant, explained that 100 of the participants were scavengers.

Aminu said they would be educated on safety and good hygiene practices, how to deal with stereotype associated with scavenging and marketing.

He added that 50 other youths were to be equiped with the requisite tools needed to build and sustain recycling businesses and also train others.