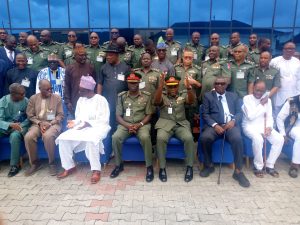 The Chief Of Army Staff (COAS), Lt.-Gen. Faruk Yahaya, on Wednesday lauded the implementation of public sectors’ financial reforms saying that it would help to prevent leakages.

Yahaya said this at the formal opening of the 13th Nigerian Army Finance Corps (NAFC) Biennial Training Conference for Year 2022 holding at the Abalti Barracks, Ojuelegba in  Lagos State which would end of Sept.9 .

The COAS was represented at the event  by the Corps Commander, Engineers, Nigerian Army, Maj.-Gen. Kamarudeen Kadiri

Yahaya said that financial reforms such as the cashless policy, Treasury Single Accounts (TSA) as well as the Integrated Payroll and Personnel Information System (IPPIS) had helped in preventing wastage.

He said, “It is, therefore, important to imbibe and glean the key lessons from these policies to improve the proficiency of our personnel in financial management.”

According to him, The conference being a bi-annual programme for the NAFC provides a unique forum to build capacity, increase knowledge and skills in financial management, in line with global best practices.

“The conference is specifically designed to improve the capacity and competencies of officers to enable them operate optimally toward operational efficiency and career progression,” he said

The COAS said that for the Nigerian Army to remain competitive, it must continue to develop requisite skills and competencies that would make it ever ready to achieve its constitutional roles.

“Thus, the success of this training conference is, therefore, central to the achievement of the cardinal pillars of my command’s philosophy.

“The attainment of the vision is hinged on four cardinal pillars, namely: Professionalism, Readiness, Administration and Cooperation.”

He said that the Nigerian Army in collaboration with other security agencies must remain steadfast and  be focused in tackling the challenges  within a joint environment.

The COAS said that it was imperative to note that development and deployment of critical capacities would  contribute significantly to the defence and security of the nation.

“The Nigerian Army must, therefore, be creative and improve  on  its problem-solving skills to be able to defeat all adversaries, particularly, the non-state actors.

“To achieve this, the prudent utilisation of financial and other resources cannot be over emphasised, especially, in the face of competing demands,” he said.

Yahaya said that he was pleased that the conference was taking place at a time when there was a greater demand for openness, and prudence in the use of public funds.

“The judicious and efficient use of resources is crucial given the anti-corruption drive of the Federal Government of Nigeria, especially, with the dwindling national revenue sequel to global economic crises

“I will also like to acknowledge the Nigerian Army Finance Corps’ ongoing reforms toward improving accountability, transparency, quality audit and assurance services,” he said.

The COAS said that at the end of the conference, he expected that certain skills and competencies would have been developed with a view to enhancing optimal and efficient discharge of duties by the Nigerian Army.

“All these innovations and reforms have added value to the Nigerian Army and contributed significantly to enhancing troops’ morale,” Yahaya said.