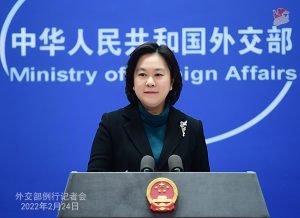 Hua said this in a remark at the reception and opening ceremony of an ongoing six months China International Press Communication Centre (CIPCC) programme that started in June 2022 in Beijing.

The event was organised under the auspices of the China Public Diplomacy Association (CPDA).

Hua said, ”Since 2014, the CPDA has been dedicated to developing CIPCC, to build a platform for the media from Asia, Africa and Latin America to observe, understand and study China.

”In the past two years, due to COVID-19, the Centre had to suspend its in-person programmes, but it has never stopped its work on the ‘cloud’.

”The cloud centre has opened a virtual window for the media of developing countries to see and feel the pulse of China’s development.

”This year, overcoming challenges from the pandemic, the Association relaunched the CIPCC on-site visits.

“This has been very warmly received. Journalists are all keen to sign up, and no travel inconveniences could diminish their enthusiasm.”

According to her, the programme provides a platform for visits to historic sites, high-tech firms, taste of traditional Chinese culture, practice of Tai Chi and writing Chinese calligraphy.

She said that the Chinese people would continue to be good hosts and make friends with all sincerity.

She said, ”I am confident that with the thoughtful organization of the CIPCC, your visits and studies in China will be both pleasant and productive.

”I wonder what was your impression of China before you came and how did the China you see differ from your prior impressions?

”I have noticed that many foreigners coming to China are quite astounded by how different the real China could be from the China they previously imagined.

”Indeed, in the world today, there are two types of views on China; one is about threat and challenge, and the other, hope and opportunity.

”Even for us Chinese, few could claim to know China 100 per cent; the country has land mass of over 9.6 million square kilometers, a 1.4-billion-plus population, history and civilisation stretching 5,000 years.”

She reiterated China’s growth as a country with one of the world’s lowest per capita GDP to be the second largest economy, adding that not less than 800 million people had escaped poverty and led better lives in the country.

She said that the Chinese Communist Party (CPC) was behind achievements recorded, adding that the party started with 50 members, to become the world’s largest governing party with 96 million members.

The Assistant Minister, however, revealed that plans had been in place by the CPC to hold its 20th National Congress this year.

According to him, the objective of the association is to pull all social resources and leverage the non-governmental channels to advance the development of China’s diplomacy and enhance understanding and friendship globally.

It is also to present to the world a civil, democratic, open and progressive national image of China.

”It is also, to enhance the perception and friendliness of people from developing countries towards China.

”Since 2014, our association established Press Communication Centres for China-Africa, China-Asia Pacific, China-Latin America and the Caribbean, as well as China-Europe that were consolidated into CIPCC in 2018,” Hu said.

Three hundred and seventy six journalists from across the world have so far been trained through the programme’s initiative in China.

The event was attended by Mr Baba Ahmad Jidda, Ambassador of Nigeria to China, stakeholders of the ministry, CIPCC and CPDA.

The high point of the event was music rendition, display of traditional African dances, joint-love song by the Journalists and unwinding to Chinese cuisines.