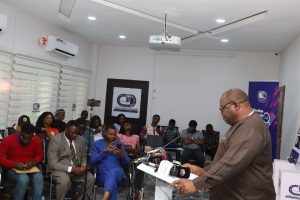 Centre for Democracy and Development (CDD) has commended the Independent National Electoral Commission (INEC) for the hitch-free conduct of Osun governorship election, urging it to sustain the improvements ahead of 2023 election.
Prof. Victor Adetula, the Senior fellow and Election Analyst at the CDD Electoral Analysis Centre (CDD-EAC) and a lecturer at Unversity of Jos said this at a Post-Election statememt briefing in Abuja on Sunday.
Adetula said that CDD-EAC issued the statement on its overall findings on the conduct and outcome of the keenly contested election.
He said that INEC’s logistics and preparations as well as the conduct of security agents represented a marked improvement on the June 18 Ekiti governorship election.
He said that the deployment of the Bimodal Voter Accreditation System (BVAS) was successful adding that CDD-EAC  observers  noticed that as  at 6:00p. m., 84.3 per cent  of polling units covered had transmitted their results via BVAS.
“On the basis of data received from CDD-EAC observers, CDD confirms that the collation process leading to the declaration of the governorship election results by INEC, was smooth and free of hitches.
“At the CDD-EAC, we hope to see the improvements recorded in the recent elections replicated in the conduct of the 2023 general elections.
“The INEC Result Viewing Portal (IReV) was in full operation for the uploading of results in most of the polling units. At about 10:00pm, 99.7 per cent  of the results were available on the IReV.
“This level of compliance is commendable and needs to be encouraged for future elections,” he said.
Adetula added:”With a few exemptions, BVAS worked perfectly in almost all the polling units across the 30 Local Government Areas (LGAs) of the state.”
He however, said that an important observation from the Osun election was the difficulty of the BVAS in capturing and accrediting the elderly.

He  said that this was the case in the Ekiti election where it either worked after several trials and waiting by the elderly or did not work at all.
He said that in spite of the apprehension about the possibility of violence during the election, the process turned out to be peaceful.
He called on all political actors  and contestants in Osun to maintain the peaceful and calm disposition during the post-election period and embrace the spirit of true sportsmanship.
Adetula said that CDD-EAC observers reported discreet vote-buying in the Osun election in contrast with the brazen vote-buying in the Ekiti election because of the presence of anti-graft security personnel.
READ ALSO:https://brandpowerng.com/osun-2022-coalition-commends-inec-congratulates-adeleke-on-victory/

He said that CDD-EAC observers also  reported substantial compliance with INEC’s guidelines as there was provision  and equipment for Persons With Disabilities (PWDs)  and people with special needs, such as pregnant women and elderly voters, to cast their ballots first.
Adetula added that  CDD-EAC noted  poor women representation as there was  only six women deputy governorship candidates and no female governorship candidate in the election.
He said there were however ,several concerns relating to the conduct of political actors and the effects of their actions on the electoral process.
“Of particular note, are the lack of internal party democracy, the unprincipled cross-carpeting of politicians from one party to the other, many litigations to disrupt  the process and the attempts to buy voters instead of campaigning to win votes on the basis of issues. ”
According to him , CDD-EAC is of the view that the political parties need to make efforts to address these concerns as the country moves towards the general elections in 2023.
He said that the CDD-EAC Fake News Hub for the July 16, Osun governorship election closely monitored online and offline spaces and a  number of fake news stories, misleading captions for images were tracked and checked.
“As Nigeria marches towards the highly anticipated 2023 general elections, all stakeholders must sustain the synergies, which have contributed to the vast improvements recorded in Osun and Ekiti,” he said.