Emefiele said the banks would have to start sourcing their FOREX from export proceeds by massively supporting the non-oil sector of the economy. 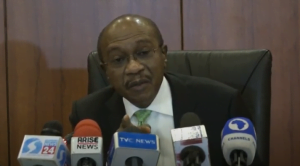 The CBN will stop the sale of foreign exchange to commercial banks before the end of the year, its governor, Mr Godwin Emefiele, said in Abuja on Friday.

Emefiele said the banks would have to start sourcing their FOREX from export proceeds by massively supporting the non-oil sector of the economy.

Addressing newsmen as fallout of the 364th Bankers’ Committee Meeting, Emefiele said the decision was in line with CBN’s commitment to boost the country’s foreign reserves through proceeds from non-oil exports.

“It is coming to an end before or by the end of this year. We will tell them not to come to the CBN for foreign exchange again; they should go and generate their export proceeds.

“When those export proceeds come, we will fund them at 5 per cent for them and they will earn rebate.

“Then they can sell the proceeds to their customers that want 100 million dollars. But to say they will continue to come to the CBN to give them dollars, we will stop it,’’ he said.

Emefiele added that Nigeria could not continue to depend on FOREX earnings to fund import obligations of products whose prices and quantities were beyond the control of the CBN.

The News Agency of Nigeria (NAN) reports that the CBN had earlier introduced a new FOREX intervention programme – “Race to $200 billion’’ (RT200) – to help to boost non-oil exports and FOREX earnings.

Emefiele said RT200 aimed at generating 200 million dollars exclusively from non-oil exports over the next three years to five years.

He said that the CBN would provide concessionary, long-term loans for business people interested in expanding existing plants or building new ones for the purpose of adding value to non-oil commodities before exporting same.

“These loans will have a tenure of 10 years, with a two-year moratorium and an interest rate of 5 per cent,’’ Emefiele said.