Emefiele said the committee was faced with various options, but guided by the need to slow down inflationary pressure while engendering economic growth. 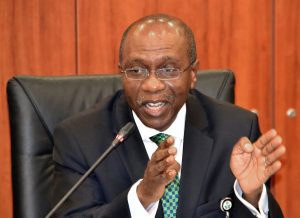 For the first time in over two years,  the Central Bank of Nigeria (CBN) has increased the Monetary Policy Rate (MPR) to 13 per cent.

Mr Godwin Emefiele, Governor of the CBN, said this while reading the 285th communiqué issued at the end of the apex bank’s Monetary Policy Committee (MPC) meeting on Tuesday.

Emefiele said that the committee also decided to retain all other parameters.

Thus, the asymmetric corridor was retained at +100/-700 Basic Points around the MPR, the Cash Reserve Ratio (CRR) retained at 27.50 per cent and the Liquidity Ratio retained at 30.00 per cent.

The News Agency of Nigeria (NAN) reports that MPC had retained the former MPR of 11.5 per cent for over two years.

Emefiele said the committee was faced with various options, but guided by the need to slow down inflationary pressure while engendering economic growth.

He said that, though the 11 MPC members unanimously voted to raise the MPR, they provided divergent opinions on the level of increase.

“Members expressed deep concern about the continued uptrend of inflationary pressure in spite the gradual improvement in output growth.

“Committee notes that the current rise in inflation is inimical to growth and the full recovery of the Nigerian economy,’’ he said.

He said that several options were considered before the decision to increase the MPR.

“After carefully reviewing developments in the two months, and outlook of growth in the domestic and global economy as well as downsides of each policy.

“It is clear and compelling that tackling inflation is more urgent in sequence of policy objectives.

“MPC urged the CBN to double its effort at supporting the priority growth-enhancing sectors of the economy.

“It urged the Federal Government to do more to provide a safe and secure environment for economic activities to stimulate growth,’’ he said.