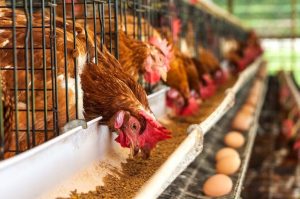 The News Agency of Nigeria (NAN) reports that thd farm is located at Amoyo in Ifelodun Local Government Area of Kwara.

Prof. Mikhail Buhari, the  Chairman of the Farm Project, disclosed this to newsmen in Ilorin during a pre-commissioning facility tour of the farm on Monday.

Buhari, who is also the university’s Deputy Vice-Chancellor (Research, Technology and Innovation), stated that the commercial poultry farm is financed by a N600 million loan facility from the nation’s apex bank, the Central Bank of Nigeria (CBN).

He said that the formal inauguration would be hosted by the Pro-Chancellor and Chairman of the University Governing Council, Mallam Abidu Rafindadi Yazidu, and the Vice-Chancellor, Prof. Sulyman Abdulkareem.

Buhari added that the epoch-making event is also expected to be graced by dignitaries from all walks of life, including Gov. AbdulRahman AbdulRazaq; CBN deputy governors and some directors as well as heads of sister institutions of higher learning and prominent traditional rulers from across the state.

He described the farm project as “a game changer” in the annals of creativity in ivory towers leadership in Nigeria.

He pointed out that the project would contribute to the country’s efforts towards attaining self-sufficiency in poultry production and boost employment opportunities for Nigerian youths.

He described the project as a success story in view of the positive changes it has brought to the people of the host community and the transformation of an hitherto sleepy region into a busy and economically viable one.

According to him, the farm has started with semi-automated production of chicks and its products.

“The farm has in stock over 25,000 broilers and 17,000 layers. Its products would certainly bridge the gap between the demand and supply of protein-yielding food.

“Apart from the insurance on the farm, well trained experts are also on the farm to perpetuate its successes,” he said.

Buhari expressed optimism that the university would make a lot of money from the farm as everything generated from it, including waste materials, would be sold towards earning more money, which would boost the institution’s internally generated revenue.

“The project is engaging relatively huge number of workers, as over 50 workers who were carefully recruited are already earning their livelihood on the farm while over 200 others are indirectly engaged,” he said.

Buhari assured that efforts would be made to ensure the success of the farm project, pointing out that each of the workers is mandated to work at their maximum best as they will be given specific targets, which must be met.

He explained that the farm was located at the South-western end of the university land to spread development and prevent the institution’s land from being encroached upon.

He also assured members of the university community that they would also be opportuned to buy the products of the farm.

The deputy vice-chancellor encouraged staff, students and members of the host community to see the farm project as theirs and ensure its protection from vandalism.