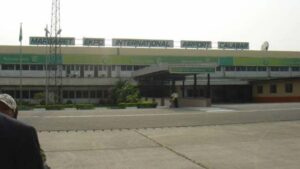 The management of Margaret Ekpo Airport in Calabar, Cross River, on Monday said that it recorded no fewer than 19,237 passenger movements in the last six weeks as aviation fuel crisis escalates cost of flight operations nationwide.

The manager of the airport also known as Calabar Airport, Mr Ayinla Gbolahan, who disclosed this to the News Agency of Nigeria (NAN) in Calabar, added that the passengers’ influx was recorded between June 1, 2022 and July 19, 2022.

NAN reports that Nigerian airlines, under the aegis of Airline Operators of Nigeria (AON), recently said there would be major disruptions of flights due to scarcity of aviation fuel, also known as Jet A1.

Gbolahan said that within the same period under review, the airport recorded 356 aircraft movements with an average of two arrivals and two departures of aircraft daily.

According to him, Air Peace and Ibom Air are currently the two commercial airlines that operate at the Margaret Ekpo Airport in Calabar.

The manager giving a breakdown of the movements at the airport said, “In June, we had a total of 5,900 passengers arrived the airport while 5,984 departed from there.

“In the same month of June, we recorded aircraft movements of 109 arrivals and 109 departures.

“We had aircraft movements of 69 arrivals and 69 departures,” he said.

He said that the airport was not operating at night because its approach lighting system (ALS) was  out of service.

On aviation fuel, he said, “the airport does not have aviation fuel depot; rather the aircraft get them from where they come from.”