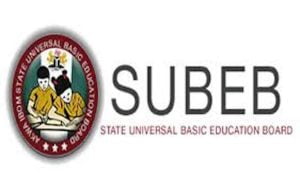 The Cross River State Universal Basic Education Board (SUBEB) has started  handing over the 108 classrooms it constructed across various schools in the state.

Miss Ochino Amatey, the spokesperson of the board, disclosed this in an interview with the News Agency of Nigeria (NAN) in Calabar on Thursday.

She said that the classroom project was among the 32 projects executed under the 2022 UBE/SUBEB intervention projects.

Amatey added that other projects executed under the yearly intervention project are:  10,034 customised plastic tables and chairs and a borehole project at Model School, Kakum in Obudu Local Government Area of the state.

She  also said that the board had constructed  a vocational hall at UBEC Model Vocational Junior Secondary School, Atimbo in Akpabuyo Local Government Area.

According to her, the 108 classrooms are spread across 19 secondary schools in the state and they range from two classrooms  to six classrooms in each of the schools.

“These projects were executed as part of the continuous effort  of the government to improve on the standard of basic education in the state.

“The state government remains committed to improving the standard of education in the state,’’ she said.