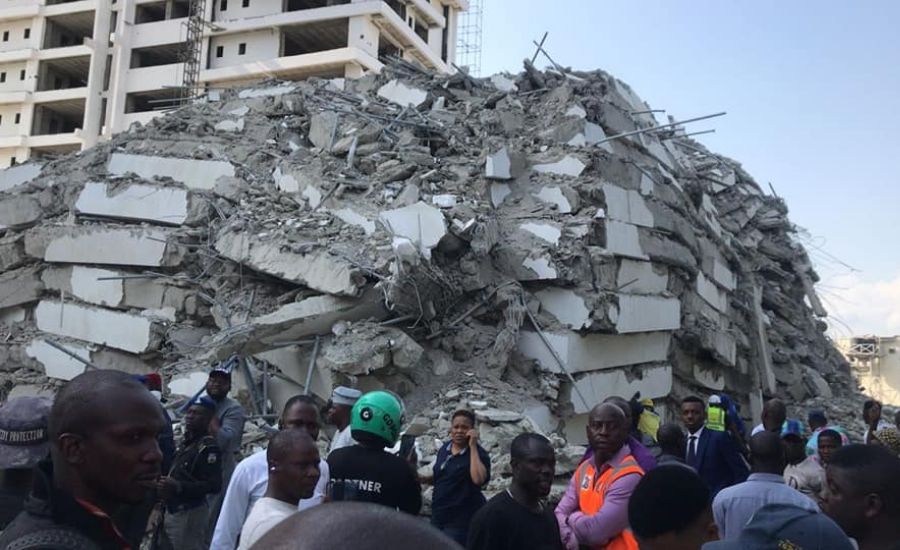 The Lagos State Government on Friday vowed to strengthen its enforcement mechanism and collaboration with experts to check the collapse of buildings in the state.
The newly appointed Commissioner for Physical Planning and Urban Development, Mr Omotayo Bamgbose-Martins, said this during a roundtable discussion with stakeholders, in Ikeja, on ending building collapse.
The gathering looked at “The role of profesionals in effective monitoring and stage inspection- a solution to building collapse”.
He said that the government was determined to confront all issues boldly, towards taming the menace, which had become an embarrassment.
Bamgbose-Martins said the kind of prayers offered by notable stakeholders for him upon assumption of office revealed the enormity of complications in the regulation of the Lagos built environment.
“This deployment is an assignment for me,” the commissioner said, vowing to tackle the problem headlong.
He said that building collapse and the attendant loss of lives adversely affected the global reputation of the ministry and the state.
The commissioner said he was beginning immediate implementation of reforms in partnership with construction experts.
He urged staff of the ministry to turn a new leaf and shun bad practices during the implementation of regulations.
This, he said, was necessary, towards achieving the state government’s zero tolerance for building collapse.
“We have to clean our house, and we will clean our house,” he said.
He assured that he would not sack staff but ensure they change their attitude while improving their capacities and competencies through retraining.
The commissioner reassured Lagos residents that they would see changes in reforms to end building collapse and safeguard lives and investments.
He called on developers, individuals and built environment professionals to join hands in tackling the problem.
“There has to be an attitudinal change in order to stop the collapse of buildings,” he said.
He said he would adopt partnerships and collaboration with the built environment experts, strengthen and enforce regulations, and ensure the indemnity of constructions.
The commissioner gave an assurance that the government would engage with built environment professionals and regulate developers.
He said that quality control through the Lagos State Materials Testing Laboratory was important and would be sustained.
Bamgbose-Martins vowed that drastic actions would be taken against changing of building designs from the originally approved ones.
While taking questions from journalists, Bamgbose-Martins said the governor had given approval for a team of 60 policemen to back up the building control enforcement officials during visits to construction sites.
Earlier, General Manager, Lagos State Building Control Agency (LASBCA), Mr Gbolahan Oki, aligned with construction experts, noting that an existing committee working on domestication of the National Building Code was expected to submit its report within two weeks.
Oki said the agency would embark on mass enlightenment campaigns across the state towards curbing the menace of building collapse.
“We all must come together to form consortiums,” Oki said.
The General Manager, Lagos State Materials Testing Laboratory (LSMTL), Mr Olufunsho Elulade, said from inception of any project, testing should be seen as key.
He said that sanctions were being made stiffer, for deterrence.
Elulade said the state was updating its tests, urging residents and developers to always engage the right professionals.
The Permanent Secretary, Lagos State Ministry of Physical Planning and Urban Development, Mrs Abiola Kosegbe, said government had been engaging experts on codes and regulations.
She said that collaboration would ensure proactive steps were taken against infractions and building collapse.
Kosegbe said stakeholders’ engagements started over two months ago and would continue until permanent solutions were achieved.
On his part, the Special Adviser to Governor Babajide Sanwo-Olu on E-GIS, Dr Babatunde Olabode, urged the built environment professionals to profer solutions and not resort to blame game.
Olabode said this was important to prevent further calamities and deaths.
He said the office of E-GIS and planning had several programmes and cited a technology tagged “capture Lagos” which would use an app to monitor building development across the state.
The special adviser said another scheme targeted 6,000 smart phones for effective monitoring of construction sites while there was a technology to digitise all planning approvals, as well as use of satellite imagery.
“All planning process will soon become transparent when we use technology,” he said.
The seven built environment profesional associations, their affiliates and regulatory bodies took turns to offer technical advice.
Associations in attendance inlcuded Nigerian Institute of Architects, Nigerian Institute of Building, Nigerian Institute of Town Planners, Nigerian Society of Engineers, Council for the Regulation of Engineering in Nigeria, and Nigerian Institute of Mining and Geosciences.
A former commissioner of the Lagos State Ministry of Physical Planning and Urban Development, Mr Toyin Ayinde, as well as the first Commissioner of the ministry, Mr Kayode Anibaba, alongside other top officials offered valid suggestions.
Sign in
Welcome! Log into your account
Forgot your password? Get help
Password recovery
Recover your password
A password will be e-mailed to you.