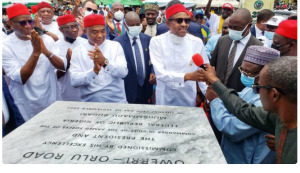 The News Agency of Nigeria (NAN) reports that Buhari performed the inaugurations on Tuesday, as part of his one-day working visit to the state, the second since September 2021.

The President also inaugurated the reconstructed and refurbished Imo House of Assembly Complex in new Owerri, along Port-Harcourt road, Owerri.

Speaking in Amaraku, Isiala-Mbano Council Area, Buhari commended Gov. Hope Uzodimma for his quintessential efforts towards the development of critical infrastructure in Imo.

He called on Imo people to keep faith with the governor and promised support for the government and people of the state.

“I commend Gov. Hope Uzodimma for these wonderful projects and I do hope that it will improve movement of goods and services as well as positively impact the socio-economic activities of the state,’’ the president said.

Also, Gov. Uzodimma said that the two roads qualified as part of the best in Nigeria, adding that they would “remain signature projects” of his government.

He stressed the socio-economic potentials of the roads as “vital to the recovery of the state” and thanked the President for honouring the people of Imo with his visit.

“As part of our 3R mantra, we are recovering roads in Imo and by the grace of God and the continued support of President Muhammadu Buhari, Imo people will be happy that we served them.

“History is being made today. This is a clear indication of our commitment to development of infrastructure. God bless all of us and may God bless you, President Muhammadu Buhari,’’ he said.

NAN also reports that a mammoth crowd of residents and party faithful were present to receive the President in spite of the sit-at-home order by the proscribed Indigenous People of Biafra.

The president arrived at the Sam Mbakwe International Cargo Airport by 10.46 a.m. where he was received by Uzodimma and members of the State Executive Council.

He also inspected the military guard of honour and exchanged pleasantries with government officials before proceeding to Banana Junction, Orlu council area, on his first port of call.