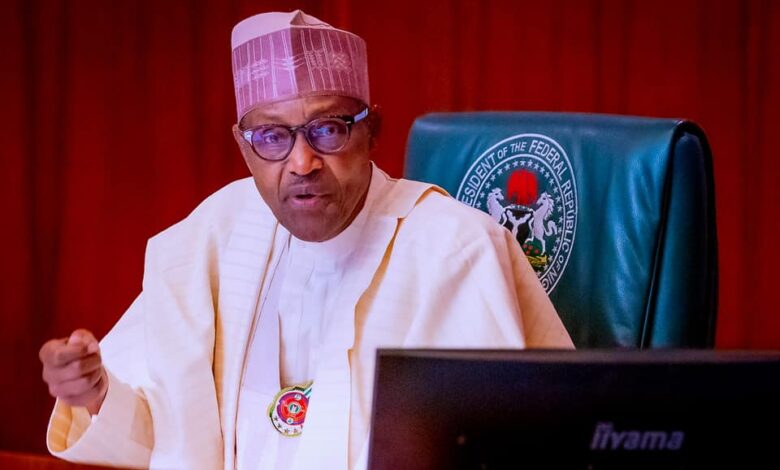 President Muhammadu Buhari has directed the Nigeria National Petroleum Corporation (NNPC) Limited and it’s subsidiaries to step in and fix section 4 of the East-West Road.
The portion of the road is from Eleme roundabout to Onne Junction, through the tax credit scheme.
Buhari made the remarks at the opening ceremony of a meeting of the 5th National Council on Niger Delta  in Uyo on Thursday.
“The East-West Road project which is now being handled by the Federal Ministry of Works and Housing, is the largest infrastructure project in Nigeria.
“It is a very strategic road, connecting the country’s busiest and foremost commercial cities in the region.
“This would be expeditiously addressed, considering the importance of the road to our national economy,” Buhari said.
Buhari, who was represented by Mr Mohammed Abdullahi, the Minister of Environment, reassured that the completion of the East-West Road was a top priority for this administration.
The President noted that one of the cardinal mandates of his administration was to tackle corruption.
He explained that Forensic Audit of NNDC had been submitted, noting that the implementation of it’s recommendations had begun in phases.
“I hereby assure you that this process will eventually bring about the constitution of a new Board for the Commission, which is the desire of most stakeholders in the region,” he said.
Mr Umana Umana, the Minister of Niger Delta Affairs, said the objective of the conference was to canvass for more and sustained collaboration with development partners and other stakeholders in the formulation and implementation of policies and programmes designed for the improvement of life in the Niger Delta Region.
Umana said the meeting was important item in the ministry and other stakeholders for the opportunity to take stock of collective engagement with the mandate of reinventing the Niger Delta Region.
He said that the theme of the council meeting was: “Harnessing 21st Century Development Initiatives and Strategies for Greater Development impacts in the Niger Delta Region.”
He said the theme further addressed the urgent need to constantly develop new strategies that could help Federal Government to reposition the Niger Delta for a better economic standing on infrastructure, healthcare, manpower development and security.
Umana said that the ministry was partnering relevant agencies, development partners, International Oil Company (IOCs) and other stakeholders on infrastructure development, investment in social services and institutional capacity building for Niger Delta Region to achieve it’s mandate.
Umana who is also the  Chairman of Council, promised to publish a compendium of projects undertaken by the ministry in all the Niger Delta Region.
Sign in
Welcome! Log into your account
Forgot your password? Get help
Password recovery
Recover your password
A password will be e-mailed to you.