He noted that BRICS countries have been striving to balance global development in the interests of developing countries. 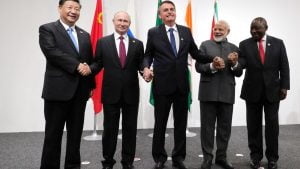 Nambiar said the summit will make a stronger call for upholding the common interests of the world, especially those of developing countries,

“There will be much expectation for the forthcoming BRICS summit as today’s world is witnessing increasing factors of instability and uncertainty.’’

He noted that BRICS countries have been striving to balance global development in the interests of developing countries.

He added that institutions like the New Development Bank have already begun to have a significant impact in their respective spheres.

Nambiar said India shared close economic and cultural ties with its BRICS partners and attaches great importance to BRICS as a platform for coordination, consultation and cooperation.

“Over the years, India has proposed important initiatives in order to strengthen intra-BRICS cooperation covering such areas as online education, healthcare, and small and medium-sized enterprises cooperation.

He added that several BRICS-themed events and meetings would be held in India this year.

“With the advent of COVID-19, there has been a marked aggravation of poverty around the world, especially in South Asia, that added urgency to global efforts to address these multifaceted challenges,’’ Nambiar said.

“It is of great significance that BRICS countries through their meetings try to reach consensuses on a wide spectrum of important issues confronting the world,’’ he added.

The BRICS members are known for their significant influence on regional affairs.

Since 2009, the governments of the BRICS states have met annually at formal summits.