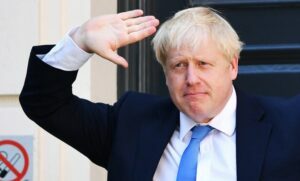 British Prime Minister Boris Johnson used a lengthy Commons statement to defend his legacy as he prepared to leave No 10, Downing Street.

On the final day before members of parliament (MPs) leave Westminster for the summer break, Johnson said he was “proud of our record” and promised his administration would “continue to deliver in our final weeks.”

Either Foreign Secretary Liz Truss or former chancellor Rishi Sunak will be elected as Conservative Party leader on Sept. 5, the day the Commons returns from its summer recess, after Johnson was forced out following a revolt against his leadership.

He used a written ministerial statement, usually used for important official announcements, to set out his government’s achievements on areas including Brexit and the response to the Coronavirus (COVID-19) to support for Ukraine.

Johnson said the statement, which stretched to more than 2,500 words, “puts on record why the millions of people who voted Conservative in 2019, many for the first time, were right to place their trust in me and in this Conservative government.”

As he prepared, reluctantly, to leave office, Johnson said: “I know that the Conservative government that follows after us will do what its predecessors have always done and meet the challenges of the day by serving the British people.”

Asked why Johnson had issued the written ministerial statement (WMS), a Downing Street spokesman said: “You’ve seen the prime minister, not just in that WMS but also in the house on Wednesday talking about his achievements since he’s been prime minister.

“You’ve heard he and others talking about them at length over the past week or so.

“So it was just another opportunity to set out the achievements of this government.”