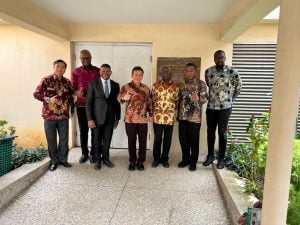 The Biovaccines Nigeria Ltd. is partnering Biofarma Indonesia Pharmaceutical Manufacturing for production of vaccines in the country.

The Chairman, Biovaccines Nigeria Ltd., Dr Oyewale Tomori, made this known during a courtesy visit of the Indonesian Ambassador, Dr Usra Harahap and his team to the company on Thursday in Lagos.

Tomori, also a virologist, said the meeting was a continuation of the arrangements and agreement with Biofarma to set up vaccine production plant in Nigeria.

According to him, the arrangement started in 2019 when Biovaccine went for a conference in Indonesia and visited the country’s vaccines production setup – Biofarma pharmaceuticals.

“Few years ago in 2019, we actually visited the Indonesian Biofarma vaccines production set up (well established), and that’s where we began the introduction and opportunity for us to have a collaboration between the two companies – Biovaccines and Biofarma.

“Currently, Biofarma produces a lot of vaccines, which are accredited by the World Health Organisation (WHO).

“The visit of the Ambassador, I think, is a step in the right direction for us to concretise all our different arrangements.

“Because of the COVID-19, there is a slow down in activities and now the pandemic is gone, we are reviving the partnership.

“We hope that in another short time, and as soon as we get the necessary approvals from the government, that things will move much faster than they have moved before,” Tomori said.

The virologist expressed optimism that the project would be successful, given the support and approval of the Federal Government and Federal Executive Council (FEC).

“Though, the success, which will be in different stages depends largely on us; we will reach agreement on what we need to do and we have to follow-up on that agreement.

“The first thing is, we are hoping that in another short time, we are going to do the groundbreaking in which the construction work will start- that’s a success in itself.

“Theen commissioning of the building and certification by WHO – that’s another milestone.

“I think the most important thing will be that first time when we will start to produce the vaccines in the country.

“And then, sustaining that success will mean continuing the vaccines production and even extending to other things and I think we will get there as time goes on,” Tomori said.

The Chief Operating Officer, Biovaccines Nigeria Ltd., Mr Everest Okeakpu, said that Nigeria was supposed to have graduated from the Global Alliance for Vaccines Initiative (GAVI) support in 2021, which had been extended to 2028.

Okeakpu said that the extension affected Biovaccines plans to kick off the vaccines production plans with Indonesia in 2019.

He said that the partnership would create huge employment opportunities for Nigerian citizens.

He added that it would conserve foreign exchange and enhance capability of the country.

“Definitely, no country can produce all the vaccines it needs, at one point, it may need to import one or two vaccines that it doesn’t produce.

“But the objective is to ensure that Nigeria becomes a vaccines production country, so that if by 2028, GAVI stops supplying the country with vaccines, it will be able to provide the vaccines it needs,” he said.

Dr Usra Harahap, an Ambassador, Embassy of the Republic of Indonesia, said that partnership would strengthen the bilateral relationship between Nigeria and Indonesia.

Harahap explained that in the course of the partnership, Indonesia would deploy both materials, human capital and technological know-how to Nigeria to boost its production capacities and capabilities

He expressed readiness and commitment of Indonesia to collaborate with Nigeria on its local vaccines production plans.