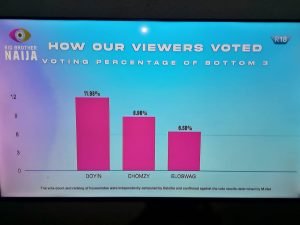 The ongoing television reality show, Big Brother Naija, Season 7 took another twist as a new level 3 house was been introduced.
According to Ebuka Obi-Uchendu, the host of the show, the newly furnished level 3 house would accommodate the evicted housemates till Sept. 18, when they will be moved to join the other housemates.
The housemates that were evicted were Doyin, Eloswag and Chomzy who were ushered into the level 3 house immediately after being evicted.
Eloswag with the lowest vote percentage garnered 6.55 per cent, Chomzy got 8.96 per cent while Doyin had 11.98 per cent.
Obi-Uchendu said that the evicted housemates would no longer compete for the grand prize of N100million but would remain as guests in the Big Brother Naija house.
This was unknown to the remaining 14 housemates.
Earlier before the commencement of the eviction show, Biggie, the Coordinator of the show issued a strike each to Sheggs and Bella for their disobedience to the rules of the house.
READ ALSO:https://brandpowerng.com/nigeria-breweries-to-splash-n50million-on-winner-of-hi-life-musical-festival-in-south-east/
Biggie refering to an altecation between Sheggs, Bella and Rachel earlier last week, said they were guilty for provocation and violence in the house.
He said provocation, golding and bullying were prohibited in the house as he also issued Rachel a warning.
He urged the housemates to learn how to settle disputes without engaging in violence as well as learn to live with people by not taking their anger too far.
He said all housemates must be reminded that they were guests in the big brother house and were all equal.
The News Agency of Nigeria (NAN) reports that 14 housemates were currently on the show bidding for the grand prize of N100million.
Sign in
Welcome! Log into your account
Forgot your password? Get help
Password recovery
Recover your password
A password will be e-mailed to you.