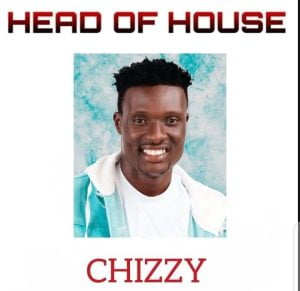 Chizzy, one of the housemates of the ongoing television reality show, Big Brother Naija, has emerged the Head of House (HOH) for the final week of the show.
This was announced by Biggie, the Coordinator of the show upon completion of the HOH games.
At the end of the first stage of the games, Phyna was disqualified from participating further, for circumventing the process of the game.
For winning the HOH games, Chizzy will be opportuned to stay in the HOH executive lounge till the end of the show.
He picked Rachel as his deputy who will share the executive lounge with him.
Biggie commended all the housemates, saying that they had proven themselves worthy by being  on the show till this stage.
He, therefore, said that there would be no “tail of house” for the week.
He said all the housemates would be privileged to enjoy a movie date, courtesy of Showmax.
The News Agency of Nigeria (NAN) reports that eight housemates are currently on the show with six bidding for the grand prize and two rider housemates who are not designed to win the prize.
The show which was launched July 23 and July 24 has experienced evictions of 20 housemates, and will end on Oct. 2 when the overall winner will be announced.
Editor’s Picks  35th NAFEST: Lagos State emerges overall winner