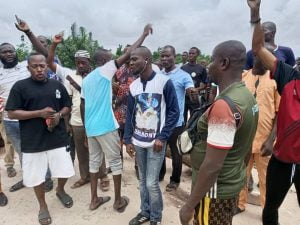 Youths in Badagry, Lagos, on Sunday blocked the Gbaji-Owode-Apa road protesting the deplorable state of the road which had been approved for reconstruction in 2018 by the Federal Government.

The Badagry correspondent of the News Agency of Nigeria (NAN) who monitored the protest reported that youths in their hundreds blocked the expressway preventing motorists and motorcycle riders from plying the road.

They appealed for the speedy completion of the road.

Mr David Aladeotan, the leader of the protesting youth, said the road was approved for reconstruction in 2018 and awarded to one SmithCrown Construction Ltd.

According to Aladeotan, from 2018 till date the contractor has not covered one kilometer of the whole project which is about 13km.

“We have consulted our representatives at both House of Representatives, Abuja, Mr Babatunde Hunpe and Mr Ibrahim Layode who is in Lagos State House of Assembly and other stakeholders over the project.

“The Federal Government of Nigeria, through the Federal Ministry of Works and Housing, is responsible for financing, constructing, and maintaining this class of roads.

“In less than a year now, the administration of President Muhammadu Buhari will come to an end, we have to come out to appeal to him and Mr Babatunde Fashola, the Minister for Works and Housing, to fix the road.

“We can no longer rely on the assurance from our lawmakers and others that it will be fixed, this is almost five years now and the contractor has not completed one kilometer,” he said.

Aladeotan called on Fashola to reaward the contract of the project to a competent construction company, adding that the contractor had been visible to the people in the area.

Another youth, Mr Oluwasegun Adande, a resident of Apa community said that the deplorable state of the road had affected socioeconomic and academic activities of the people living in the area.

“Many business opportunity have been lost due to the state of the road as the road leads to many West Africa countries including Republic of Benin, Ghana, Togo and Mali.

“Even students that are going to school in Badagry are not finding things easy as transport fare has increased from N100 to N500 from Owode to Badagry.

“Farmers are paying through their noses to take their farm produce to the market and this has resulted to inflation.

“The road has condemned many vehicles and many have abandoned their cars at home,” he said.

Adande urged the Minister of Works and Housing to come and inspect the road, adding that he had inspected Lagos Badagry Expressway twice this year without inspecting the Gbaji-Owode-Apa road. The youth in Badagry protesting abandonment of Gbaji-Owode-Apa road by the contractor handling the project since 2018.

Mrs Mercy Ibrahim, a lady residing in Gbaji, said that the resident were full of joy when it was announced on radio that the road would be reconstructed.

“It is unfortunate that after over five years after the approval we are still at the same place, many of us have lost pregnancy due to deplorable state of the road.

“Some have lost their husbands, children and loved one through this road, we are appealing to President Buhari and Fashola to come to our rescue and safe us from untimely death due to the road,” she said.

The News Agency of Nigeria (NAN) reports that the Gbaji-Owode-Apa Road which was among the 14 road projects approved for reconstruction by the Federal Executive Council presided over by President Muhammadu Buhari on June 13, 2018.

The FEC approved N185.2 billion for the 14 road projects, out of which N4.37 billion was approved for reconstruction of the Gbaji-Apa-Owode road.

The contract was awarded to Smithcrown Nigeria Ltd. Lagos with contract No. 6454.