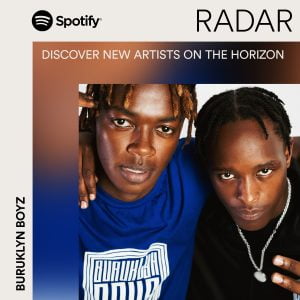 Spotify, an online music streaming platform, says six African artistes has joined its “RADAR” artistes programme, dedicated to the spotlight and discovery of emerging artistes across the world.

Phiona Okumu, Head of Music, Spotify Africa, disclosed this in a statement on Monday in Lagos.

She said this batch of artistes followed in the footsteps of other African talents like Elaine, Willy Cardiac, Tems and Focalistic who all joined the programme in 2020.

This, she said exposed them to new global fan communities on the platform.

“It gives me so much joy to bring back our RADAR Africa programme, and to do so within a deservingly bigger and better format.

“It is so important that we continue to identify and find ways to offer developing artistes a fair chance at success on and off platform.

“We have six outstanding ones from the region to begin with and look forward to sharing in their journey while we provide the resources to elevate them to the next level of their respective careers, and hopefully make thousands more Spotify fans around the world,” she said.

According to her, since its launch, RADAR has driven an increase in listening and furthered fan-artiste connections.

“And as part of the programme, these artistes will receive editorial, on-platform and off-platform support from Spotify to help broaden their respective fanbases,” she said.

Okumu noted that as part of its Glglobal hub launch, Spotify would  prioritise the promotion of RADAR playlists, RADAR podcasts, Spotify Singles, and priority releases from RADAR artistes across all regions.

“Bigger Than Africa” set to debut on Netflix May 13