“Automation will be the backbone of efficiency in the port because it will improve revenue; and I am really interested in getting this done. 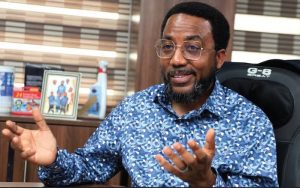 Mr Mohammed Bello-Koko, the Managing Director, Nigerian Ports Authority (NPA), on Sunday said that automation would be the backbone of efficiency in the ports.

Bello-Koko who said this at a media chat with maritime journalists in Lagos noted that modern ports were all moving towards automation.

He stressed the need for full automation of port activities devoid of manual interference.

“Automation will be the backbone of efficiency in the port because it will improve revenue; and I am really interested in getting this done.

“We have achieved some level of automations but they are all in silos and we need to integrate them. We need to also put something that everyone will log into, the shipping lines and others.

“We need to copy things that are being used in other ports, things that will add value and that is, the Port Community System,” he said.

According to him, the Port Community System will enable all stakeholders, the NPA, the Nigerian Shippers’ Council, the shipping companies and the Nigeria Customs Service, among others to log into the system for exchange of data and processes.

“The International Maritime Organisation (IMO) has mandated all ports to deploy such information technology and softwares by 2025, our target is actually 2023, maximum early 2024,” he said.

Bello-Koko said that the NPA had been trying to deploy the Vessel Traffic Services (VTS) for over 10 years and had reached out to the Nigeria LNG Ltd (NLNG) for collaboration.

“We need to get qualified people to deploy VTS because they are very few. IMO gave us some companies but some of them did not meet our requirements or did not want to work with the NPA.

“However, NLNG has a VTS in Bonny even though it is not robust and we don’t have a problem collaborating with them on that. We need them to do the survey and put the nodes and sensors around.

“It is one of the most important thing in the maritime industry around the world. One should be able to have visibility of the ship and it will be a tremendous achievement,” he said.

Bello-Koko said that the NPA would ensure usage of the application when introduced to improve speed and leakage blockage.

He said that the authority had started working on the rehabilitation of port infrastructure with the right marine equipment in place.

“We have very old ports, one of the major problems is the decayed infrastructure; TinCan Island is practically collapsing and so we decided to focus our budget toward the rehabilitation of key ones.

“What we have done was to start talking to lending agencies, we have started talking to terminal operators who have operated within 10 to 15 years that their leases are about to expire, on how much they will put back.

“For their leases to be renewed, they need to contribute to the development of the ports. If they don’t, we will give them to someone or borrow for them to be rehabilitated. But the rates to be paid will go up.

“If we don’t do that they will keep managing those places,” he said.

Bello-Koko assured stakeholders of enhanced security and navigational equipment at the ports.

Speaking on Eto, the e-call-up system for trucks, he noted that the major challenge of the initiative was enforcement.

“A month ago, NPA signed an agreement with the Lagos State Government to deploy mobile court to that location.

“We went round and identified locations where there should be checkpoints and at the end of the day if they are 60 and we decided we want to have 20 in that location, we will put a signage there.

“Checkpoints outside that location is illegal. And all checkpoints are not meant to check Eto tickets, some are there for the purpose of national security and community policing and they do not have business of stopping trucks.

“We are looking at a possibility of introducing an alternative so as to have competition,” he said.