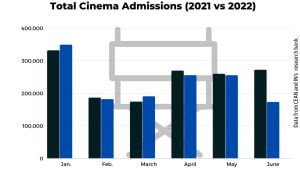 Several big budget Nollywood films including ‘The Man of God’, ‘Blood Sisters’ and ‘Chief Daddy 2’ made their debut on streaming platforms in the first half of the year, carrying the audience along with them, a move which experts have attributed for the poor turnout in cinemas.

The News Agency of Nigeria (NAN) reports that these films are part of the growing content docket spread across several streaming platforms, which have launched in Nigeria.

Netflix and Showmax joined home-based IrokoTV and in the last quarter of 2021, Amazon officially launched in the country and has begun commissioning its own slate of content.

Film business journal, The Industry by Inside Nollywood, has reported a decline in Nollywood’s cinema market share in the first half of 2022.

The journal notes that “with the introduction of streaming, it is cheaper to bundle all your Nollywood gamble on one platform, which costs less than N5, 000 monthly than go through traffic and spend at least N2, 000 per film (outside other costs).

“The audience is afraid to keep gambling and the economy does not make it easier to throw more money to the wind.

This is why when they find a film that is way less disappointing, they reward it with loyalty, hoping stakeholders in the industry will take hints,” it added.

Speaking on the data, co-publisher of the Inside Nollywood journal Anita Eboigbe told NAN, “there are two issues here.

”The first is that the general film admissions is not growing. For the last three years, except 2020, about 1.5 million tickets have been sold in the first half of each year.”

“It is a stagnant number annually with slight variations in market shares between the players.

“The second is the shrinking market share by Nollywood which is alarming given that it defeats the multiple sources of income debate and further slows down the process of customer acquisition for films in Nigeria,” she said.

Eboigbe added that among filmmakers, there is a slow disenchantment with the cinema distribution process.

“The primary reason is that the returns are not what they are hyped to be and secondly, they do not seem to be improving anytime soon. Yet, distributors and exhibitors do not seem alarmed enough to aggressively do something about it.”