Okon said that considering the high level of moral decadence in the country, NOA as an agency saddled with the responsibility of guiding the moral ethos of the nation, should be on government’s priority list for funding. 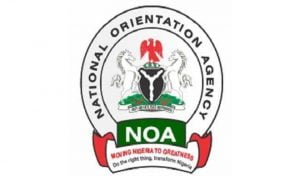 The Association of Senior Civil Servants of Nigeria (ASCSN) has urged the Federal Government to improve budgetary allocation to the National Orientation Agency (NOA) to enhance service delivery and productivity.

This is contained in a statement issued in Abuja on Wednesday by the NOA Assistant Director, Press, Mr Paul Odenyi.

According to the statement, the National President of ASCSN, Dr Tommy Okon, gave the advice during a working visit to the NOA Director-General, Dr Garba Abari.

Okon said that considering the high level of moral decadence in the country, NOA as an agency saddled with the responsibility of guiding the moral ethos of the nation, should be on government’s priority list for funding.

He said it was time for government to have a rethink about the little attention it had paid to the agency, which communicated government policies, programmes and activities to create public awareness and buy-in.

He expressed delight at the cordial and healthy relationship between the management and labour unions in NOA, conditions he described as essential for an active and productive workforce,” Okon said.

The union leader urged the management of NOA to make staff welfare paramount in the areas of promotion, transportation, promotion arrears and bonuses, amongst others, to promote productivity.

He urged the government to boost the agency’s funding to enable it carry out its statutory responsibilities.

Abari, however, stressed that the NOA would continue to deliver on its mandate notwithstanding the constraints.

According to him, NOA is a citizens engagement agency present in all nooks and crannies of the country.

He said that the NOA had robust platforms to carry out its public enlightenment, orientation, behaviour modification and mass mobilisation functions for national cohesion and development.

He urged the association, as partners in progress, to continue to support the agency in its quest for better welfare and continued cordial relationship with the management.

According to him, NOA will continue to create an enabling environment and provide unflinching support to the union at all times.