ARIAN re- elects Odewunmi as president

Odewunmi appreciated the insurance agents for the trust reposed on him in his previous administration and for another opportunity given to him to serve the association. 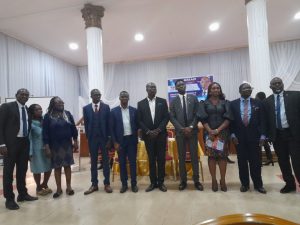 The Association of Registered Insurance Agents of Nigeria (ARIAN) on Friday re-elected Mr Kazeem Odewunmi of Mutual Benefits Assurance as its National President for a second term in office.

The News Agency of Nigeria (NAN) reports that Odewunmi was re-elected unopposed during the 2022 ARIAN Annual General Meeting (AGM), Election and Induction of New Executives of the association held in Lagos.

Odewunmi appreciated the insurance agents for the trust reposed on him in his previous administration and for another opportunity given to him to serve the association.

He promised to consolidate on his past achievements and also to embark on new initiatives and projects that  would enable its members to take their rightful place in the industry and give the profession more relevance.

Mr Gbadebo Olumerun , Chairman , ARIAN 2022 Electoral Committee /Former President of the association urged the new executives to work towards promoting the activities of agents and making the association more visible and viable.

Olumerun pointed out that agents were the most integral component of the industry should not allow themselves to be relegated.

He said that the executives must organise more training workshops for its members in order to build their capacities and also to sponsor some  to be certified members of  the Chartered Insurance Institute of Nigeria  (CIIN).

Olumerun also implored members of the association in the 52 insurance companies in Nigeria to be more committed to the vision of ARIAN and also to be involved in its activities.

In another development, ARIAN awarded Miss Sewande Amosu of AXA Mansard Insurance as the best insurance agent in the country.

The association said the award of excellence followed keenly contested nominations from insurance companies in the country.