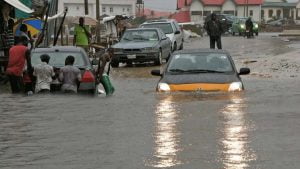 Some states in the Northwest geopolitical zone have started stockpiling relief materials in response to Nigerian Meteorological Agency (NIMET) prediction about possibility of experiencing flooding this rainy season.

A survey conducted by the News Agency of Nigeria (NAN) in Kaduna, Sokoto, Kebbi, Zamfara,Kano and Katsina, indicated that some state governments have placed their relevant disaster management agencies on alert.

Also, as part of proactive measures, places to serve as temporary shelter for those to be displaced by the anticipated disasters, have been identified and are being renovated.

Most respondents attributed the frequent occurrence of flooding in urban and rural communities to the unwholesome habit of building structures on water-ways, as well as dumping Refuse in drains.

Jili told NAN that about three persons had been killed and 2, 250 houses destroyed as a result of flooding and windstorm in five Local Government Areas of the state this month.

The Secretary listed the affected Local Government Areas as Rano, Kibiya, Doguwa, Danbatta and Kiru, attributing the calamity to the indiscriminate dumping of refuse in waterways and drains.

He therefore urged residents to desist from such bad practice to avert a recurrence of such disaster, just as he pledged his Agency’s preparedness to respond to emergency situations, carrying the people along in the process.

“On June 9, the Agency organised a stakeholders conference to brainstorm on disaster risk reduction and disaster management.

“We sensitised religious leaders and heads of communities in the five emirates on how to manage heavy rainfall that was predicted by NiMet.

“We also used the media, markets and other gatherings to sensitise the residents on the need to ensure easy flow of water in their places,” he said.

On his part, the Territorial Co’ordinator , National Emergency Management Agency in Kano, Dr Nuradeen Abdullahi, assured that his Agency was prepared to respondent to any situation, adding that there were enough relief materials in stock.

In his contribution, Dr. Aliyu Barau, a lecturer with the Department of Urban Planning, Bayero University, Kano, observed that flooding had become a serious environment challenge in the country, hence the need to hasten measures that would address the problem.

He stated that although there were many factors responsible, blockage of water ways by residents was a major factor, hence the need for change of attitude.

Dr Kabiru Getso, Kano State Commissioner for Environment, said government had been engaging in evacuation of Refuse as part of its “Keep Kano Clean” campiagn.

“So far, more than 70,000 linear meters of drains have been de-silted and more than 1,600 strips of silted materials have been evacuated from drains”, he revealed.

Getso also revealed that the state had submitted the ‘State Pollution Control Bill’ to the state House of Assembly, which had passed through second reading.

“If passed, the state will have laws criminalising environmental offences such as indiscriminate dumping of refuse and other forms of environmental pollution,” he said.

Meanwhile, Malam Mohammed Yahaya, Controller- General of a Kaduna-based No -Governmental Organisation, Safety Awareness and Environmental Support Initiative (SAESI) has observed that improper waste disposal was the major cause of flooding in Kaduna metropolis.

Yahaya told the NAN in Kaduna that their investigations revealed that some wards in Kakuri, Kaduna South, Chikun, Kaduna North, Igabi, and Kajuru, were prone to flooding this season due to excessive heap of Refuse in their surroundings.

He said unless residents embarked on evacuating the heaped Reduse before the peak of the rainy season this year, there might be disasters that could lead to loss of lives and property.

He mentioned that indiscriminate dumping of waste, dredging of sand without licence and building of structures on water ways, were other causes of flooding in urban areas of the state.

According to him, it has been predicted that some communities in major urban settlements like Birnin-Gwari, Kafanchan and Saminaka are most likely to experience flooding as a result of erection of structures on water-ways.

” As we speak, Brinin-Gwari has been flooded already this year due to improper building on water-ways.

“As part of my professional calling, I advise people within the areas that are exposed to danger, to move, and I also admonish them to do their best to reduce some heaps of Refuse that have piled up”, he stressed.

He called on the State Government to intensify its sensitisation of residents, as well as ensure adherence to provisions of building plans.

Also in Katsina state, the Village Head of Yangora, in Daura Local Government Area, Alhaji Bello Shahu, cautioned his subjects against practices that could trigger flooding.

Shah told NAN that unwholesome practices like erecting structures on water-ways and dumping Refuse in drains, were the major causes of flooding in most villages or settlements in his domain.

He commended the Federal Government for constructing some roads and drains, which had helped in reducing threat of flooding.

According to him, the construction of these roads has saved communities from the agony of taking refuge in primary schools and other public structures during rainy seasons.

“In the past, whenever it rains, particularly in the evening, and also during market days, we find it difficult to cross to neighbouring villages because of flooding.

“However, with the construction of roads and drains in our communities by the Federal Government, most of our problems are now solved.

“My appeal to all of us is that we should avoid habits or practices that can cause flooding in our communities as we are now in the rainy season” he advised.

In his input to the survey, Malam Umar Isma’il, a meteorological expert from Sokoto Urban and Regional Planning Board, identified poor waste management approach and inadequate drains system as the major causes of flooding in the state.

He also noted that flooding in the state were often induced as a result of some unwholesome practices.

“Our people have the poor attitude of dumping Refuse around them, and sometimes utilise drains around them as waste disposal bins.

“This poor attitude of blocking drains has continued to raise dangers of flooding across many communities.

“There is need for the communities to be on alert and appreciate the dangers occasion by flooding; they should continue to support government policies towards controlling the situation”, he said.

Also speaking to NAN on the issue, Mr David Simon, an Environmental Analyst in Sokoto, said most of the factors responsible flooding in the state, were human induced.

“Today, many residential areas have no drains, but only rely on natural channels; again, there is unregulated urban expansion and poor attitude to waste disposal by people.,” he said.

Simon suggested that in order to overcome the challenges, government must focus more on control, than post-disaster flood response.

“Reducing and addressing exposure to flood risk should be the priority of the government to overcome human-induced causes of flooding.

“Doing so will enhance our journey towards sustainable development, and our desire for economic growth,” he said.

In Kebbi, the state Emergency Management Agency (SEMA), advised Chairmen of Local Government Area that have communities located in flood-prone places, to brace-up for possible challenges.

The Executive Director of the Agency, Alhaji Abbas Kamba, who, gave the advise, urged the chairmen to come up with policies that would help in addressing the challenge.

Kamba said his Agency had stockpiled assorted relief materials sequel to the receipt of early warning from NIMET that Kebbi was among states to witness possible flood in 2022.

“Upon the receipt of 2022 NIMET seasonal climate prediction on the possibility of flooding in the country, SEMA commenced action by organising series of meetings with stakeholders to fashion out modalities and strategies of mitigating the impact of the anticipated flood.

“The state and 21 local government councils, in collaboration with the state Ministry for Education, identified higher ground and schools for possible relocation of all affected people in the flood – prone areas.

” We have repositioned search and rescue team of the state Department of Fire Service.

“We have also stockpiled assorted relief materials both food and non-food items, as well as provided necessary logistics for active response in the areas”, he said.

Kamba added that the Agency had been sensitising residents to imbibe positive attitude as part of efforts to mitigate the challenge.

“We have drawn the attention of Local Government Councils and the State Urban Development Authority (KUDA) on the need for the modification of settlements and erection of flood barriers to withstand flooding”, he said.

The director urged the state government to consider channelisation and de-silting of major rivers in the state, to allow free flow of water.

On his part, Commissioner for Local Government and Chieftaincy Affairs, Alhaji Hassan Muhammad, enjoined the local government councils in the state to start stock-piling relief materials as a proactive measure.

He said it was safer to prepare ahead, instead of waiting for the disaster to strike before taking measures.

NAN reports that the local government areas likely to be affected in the state, as listed by the authorities, are Birnin Kebbi, Ngaski, Yauri, Koko/Besse, Argungu, Dandi, Bagudo, Bunza, Augie, Shanga, and Zuru LGs.