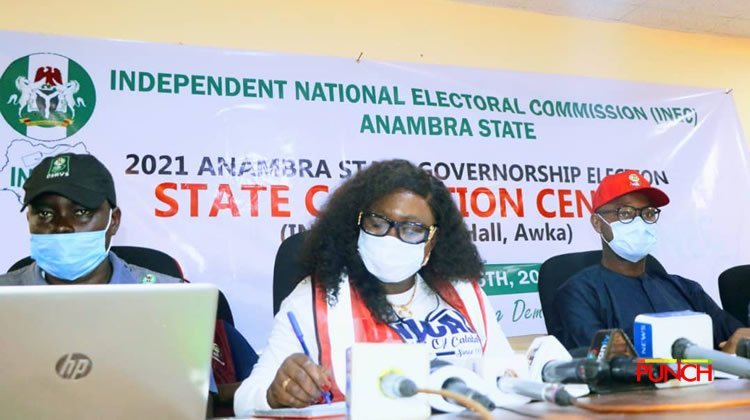 Following the suspension of collation of results in respect of the 2021 Anambra State Governorship election as announced yesterday, November 7, 2021, by the State Collation/Returning Officer and the decision of the Commission to hold the election in Ihiala Local Government Area on Tuesday, November 9, the Commission in line with extant rules and regulations have made a slight adjustment to the commencement and closing time for the said election.

Accordingly, polling in respect of the supplementary election for Ihiala Local Government will commence tomorrow at 10am and end at 4pm.

The Independent National Election Tribunal (INEC) said this decision, which will be strictly complied with, has been taken following a careful review of the prevailing situation in Anambra state and is being widely shared with the stakeholders including security agencies.

INEC urged political parties, voters, election duty officials, election observers, the media and the general public to note this slight modification. We also appeal to citizens to conduct themselves in an orderly manner to ensure that the election is brought to a peaceful conclusion.

A statement by the returning Officer for the Anambra State Governorship Election,  Prof  Florence Banku Obi yesterday said “…  you all know, we have collated results for twenty (20) out of twenty-one (21) Local Government Areas. The outstanding result is for Ihiala Local Government Area where, for various reasons, the Independent National Electoral Commission (INEC) could not deploy yesterday. Consequently, based on Constitutional considerations, provisions of the Electoral Act and the Revised Regulations and Guidelines for the Conduct of Elections issued by the Commission, the supplementary election is indicated for Ihiala Local Government Area.”

“First, Section 179 (2) of the Constitution of the Federal Republic of Nigeria 1999 (as amended) provides that to be declared the winner of the Governorship election, a candidate must secure both the highest number of votes cast and 25% of the votes cast in at least two-thirds of the Local Government Areas of the State.   Therefore, it is important to complete the election in Ihiala Local Government Area in order to make that determination. “

“Similarly, Section 179 (3) of the Constitution provides that a run-off election shall take place if no candidate meets the requirements of Sub-section 2 of that Section. Such a run-off shall be between the candidate with the highest number of votes and one among the remaining candidates who secured a majority of votes in the highest number of Local Government Areas in the State. This further underscores the importance of conducting election in all the Local Government Areas before a declaration can be made.”

“Secondly, Section 26 of the Electoral Act 2010 (as amended) envisages the postponement of an election where there is a cogent and verifiable reason to do so, especially threat of breach of the peace. One major reason for not deploying for election in Ihiala on Saturday, 6th November 2021, is a security threat which led to staffing and transportation constraints, among others.”

“Finally, Clause 47 of the Revised Regulations and Guidelines for the Conduct of Elections provides that supplementary election shall be conducted where the Commission due to logistical challenges is unable to deploy on election day.”

She continued that: “Given the foregoing, it becomes imperative to bring Ihiala Local Government Area at par with the other twenty (20) Local Government Areas in this election before we can make a valid declaration or take any further necessary action based on the extant law. “

“Therefore, I, Professor  Florence Banku Obi, in my capacity as Returning Officer for this election, hereby announce the suspension of the process of collation of results and declaration of a winner until the supplementary election is held in the 326 Polling Units in Ihiala Local Government of the State.”

“I have conferred with the Commission, being the body responsible for fixing the date of the election, and the Commission has decided that the supplementary election will take place on Tuesday, 9th November 2021. Thereafter, the collation of results shall resume.”

Meanwhile, according to The Guardian reports, the Situation Room Convener, Ene Obi, who made this known in a statement yesterday in Abuja, said: “Some of the specific instances include the sale of votes for amounts ranging from N1,000 and N6,000 at various locations.

“However, this was being carried out very discreetly in some Polling Units (PUs), while in others, the vote-buying was done in full glare without prevention from security personnel.

“Nevertheless, voters in a particular polling unit in the state rejected an inducement of N5,000 per vote. Situation Room commends the courage of these voters. For this, we say a big well done to Ndi Anambra.”

Obi, however, noted that the election was generally peaceful against the background of potential violent rhetoric leading up to it, even though there were pockets of disturbances.

On Bi-Modal Verification Accreditation System (BVAS), she stated: “Reports from field observers indicated widespread malfunction of this technology, as it failed to authenticate voters’ fingerprints and detect faces.

“Furthermore, some of the ad-hoc staff experienced levels of difficulty in operating the machines. In some locations, the machines were working rather slowly and took as long as 10 minutes or more to accredit a single voter. This severely stalled the accreditation and voting process.”

“Situation Room notes that INEC ad-hoc officials in some instances gave priority to Persons with Disabilities (PWDs), elderly persons and pregnant women in most of the polling units observed. However, some of the PUs were not accessible to some categories of PWDs.

Obi called on the resilient people of Anambra to remain calm and law-abiding as the election runs its course.

“We call on INEC to ensure the peaceful and transparent conclusion of this election. Situation Room also calls on security agencies to continue to maintain law and order through the remaining phases of this exercise,” she added.