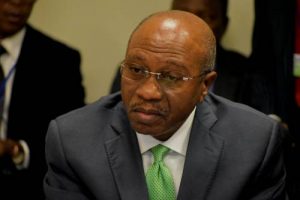 The presidency has dismissed as fake and untrue that the Governor of the Central Bank of Nigeria (CBN), Godwin Emefiele, could not account for about N89.1 trillion the CBN collected as Stamp Duty charges.

The News Agency of Nigeria (NAN) reports that a member of the House of Representatives from Jigawa, Gudaji Kazaure, in a viral video, had allegedly accused the CBN governor of attempts to cover-up facts surrounding the collection of the controversial amount.

He also alleged that he was deliberately being denied access to present a preliminary report of a committee set up by President Muhammadu Buhari to look into the alleged stamp duty funds being withheld by the CBN.

Also in the viral video,  Kazaure urged the president to either allow him to present his report to him or immediately order a thorough investigation of the alleged stamp duty funds.

However, Malam Garba Shehu, the president’s Senior Special Assistant on media and publicity, described the Kazaure’s Committee as illegal, saying the committee was dissolved on the directive of Buhari.

The statement read in part: ”In the first instance, the committee on the alleged loss of stamp duty funds he is talking about is an illegal committee, it was dissolved on the directive of the president.

”Anyone familiar with our constitution will find it curious that a member of the Parliament is the Secretary of an Executive Committee.

”It suffices to say that the entire net worth of the nation’s financial sector, the assets of the banking sector put together are not worth N50 trillion, not to talk of the kind of money he is talking about.

”CBN assures that there is absolutely no problem, whatsoever, with money from Stamp Duties.

”There is a committee duly set up by the president in June 2020 chaired by the Attorney-General and Minister of Justice and the Secretary is the Chairman of the Federal Internal Revenue Service, FIRS that is currently reconciling the stamp duty accounts.”

Shehu said that the job had not finished, adding, ”as it is, there is nothing to give credence to wild accusations made against the administration.”

The presidential aide further revealed that earlier investigations carried out by government departments and anti-corruption agencies on the stamp duty accounts indicated that nothing sensational had been discovered by them.

He said: ”Following speculation and the many allegations, earlier investigations were commissioned by government departments and agencies.

”These included the Ministry of Finance, the Revenue Mobilisation and Fiscal Service, the Economic and Financial Crimes Commission (EFCC), the Nigerian Deposit Insurance Corporation and nothing sensational had been discovered by them. Issues of reconciliation are being handled.

”He sees him as many times as he wants and he is welcome to come and see him again and again.”