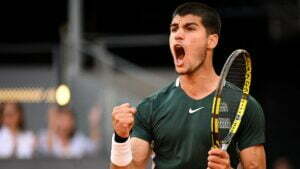 Carlos Alcaraz has his sights set on climbing to the summit of the ATP rankings after becoming the youngest player to reach the top five since Rafael Nadal.

The Spaniard was downed in the Hamburg European Open final by Lorenzo Musetti over the weekend.

But he nevertheless saw a rise in his stature to a career-high position of fifth on Monday.

In doing so, it makes the 19-year-old the second youngest male to break into the top five this century, trailing only Nadal and bettering Novak Djokovic by a matter of months.

“Top five for me is pretty amazing and I will keep going to be [number] one.”

Had Alcaraz won in Hamburg, he would have risen to fourth.

Other movements in the rankings include a rise to number 31 for Musetti and a return to the top 200 for Dominic Thiem, at number 199.