The project which spans a length of 614km is being developed by the Nigerian National Petroleum Company Ltd. (NNPC) to transport natural gas from Ajaokuta, Kogi through states and urban centres in Nigeria. 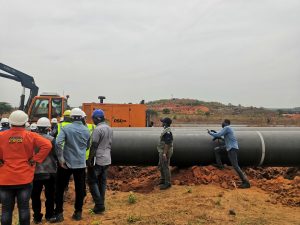 The project which spans a length of 614km is being developed by the Nigerian National Petroleum Company Ltd. (NNPC) to transport natural gas from Ajaokuta, Kogi through states and urban centres in Nigeria.

The News Agency of Nigeria (NAN) reports that Kyari, was on inspection with its Board Chairman, Sen. Margery Okadigbo and other board members to assess the level of work done on the project which began in 2020 .

The project is expected to be completed in the first quarter of 2023.

Okwuosa described gas as a key factor in the energy value chain in the country, adding that it would significantly make Nigeria to come up again industrially.

He said the mainline construction was one-third completed, the engineering more than 80 per cent while procurement was more than 50 per cent done.

“We feel good as a company, and we know that what we are doing is historical and it’s very important to the country.

“So, it’s not just about the pipeline is about the facilities. So, we feel good that we are moving and we are sure that we will keep the schedule,” he said.

He said that pipeline activities involved a lot of planning, key and core engineering design, but most importantly putting the boots on the ground.

“Putting boots on the ground means bringing these pipes going through every meter of the 614km, of which we are building 303 km,” he said.

He said that the challenges it was facing specifically ranged from security, tough terrain and weather.

“And, project of this magnitude requires a lot of money but NNPC is up to the task. They have been able to mitigate some of the issues that arose originally.

“So, challenges will be there. But the most difficult remains the security challenge,” he said.