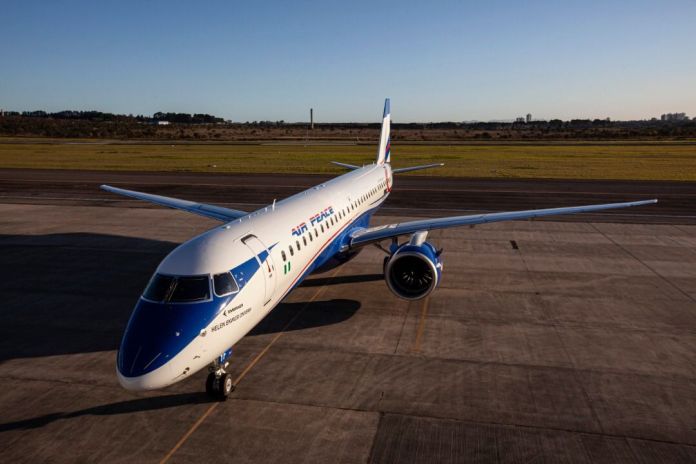 The spokesperson of Air Peace, Mr Stanley Olisa, made this known in a statement issued in Lagos on Friday.

The News Agency of Nigeria (NAN) reports that Embraer E192-E2 is the largest commercial aircraft of Embraer, a Brazilian aircraft manufacturer.

Olisa explained the aircraft would be displayed on the static apron at Kigali International Airport on Sept. 12 for Very Important Persons and dignitaries attending the Aviation Africa Summit and Exhibition to tour the aircraft.

The airline’s spokesperson said Air Peace was happy to be displaying one of its ultra-modern airplanes at the Aviation Africa this year, with its partner, Embraer.

He noted that Air Peace currently had five E2s and the acquisition of these brand new planes was in line with its fleet modernisation programme.

“Air Peace Limited, Nigeria’s largest airline, will showcase one of five units currently in operation with the airline.

” The E2 is helping Air Peace achieve its ambition of connecting not just all of Nigeria, but the whole of the African continent, while feeding long-haul flights from its Lagos hub.

“The E195-E2, the most quiet and efficient single aisle aircraft flying today, saving up to 25 per cent carbon dioxide emissions compared to previous generation aircraft.

“This aircraft has 124 seat capacity in a typical dual class configuration, offering more space, privacy and comfort,” he said.

Olisa said the aircraft was to further strategically position the airline to meet the growing connectivity needs in the African market.

Commenting, the Vice President, Middle East and Africa at Embraer, Mr Stephan Hannemann, said, Embraer had been a proud partner of Aviation Africa for several years.

Hannemann said the company was honoured to showcase its state-of-the-art flagship E195-E2 in Kigali, operated by its airline partner, Air Peace of Nigeria.

He said: “Embraer has built a great presence on the African continent, with over 200+ aircraft operating at over 60 airlines.

“The E2 family is a perfect matchmaker for the African market environment, and I’m convinced the E2 will play a key role in increasing market connectivity across the region.”

The Managing Director, Aviation Africa Summit, Mr Mark Brown said the summit was delighted to work with Embraer to bring the aircraft to Kigali and offer the opportunity for Rwandan and international VIPs to tour the aircraft.

NAN reports that Aviation Africa is Rwanda’s global aviation event and not fewer than 1,100 attendees from over 80 countries are being expected at the summit.