He said that the fish hatchery and fish feed plant were ready for inauguration and had created some jobs in the area and would still employ more hands when it commenced full commercial operations. 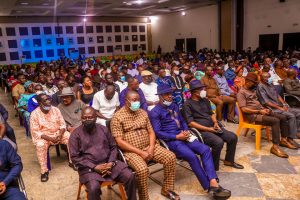 An indigenous Agro-firm says it has constructed the first Indigenous fish hatchery and fish feeds factories in Bayelsa to make the state self-sufficient in fisheries value chain.
Chief Joshua Oruge, Chief Executive Officer of Joshua Robert Oruge Enterprises, the agricultural firm, said that the project was conceived to consolidate the state’s leading position in fishery through aquaculture.
Oruge stated this on Tuesday, while speaking with newsmen during a tour of ‘God is My Light, Sea Never Dry Farms’ in Ogbolomabiri, in Nembe Local Government Area of Bayelsa.
He said that the fish hatchery and fish feed plant were ready for inauguration and had created some jobs in the area and would still employ more hands when it commenced full commercial operations.
Oruge appealed to the Bayelsa government, the Federal Government and other financial agencies to support the firm to overcome its teething problems.
He noted that the agricultural sector was in dire need of financial backings by specialised lenders and infrastructure to ensure that the sector was uplifted to run as a business as opposed to the present subsistence level.
He said that the state had a vast arable land for agriculture, adding that it was high time the government started seeing agriculture as a veritable alternative to the hydrocarbon wealth of Bayelsa.
He said that agriculture had the potential of turning the economic fortunes of the state around.
Oruge, who also conducted journalists round his plantation, consisting of various cash crops including 10 deep fish ponds, stated that the farm was seated on 12.5 hectares of land.
According to him, the fish ponds have over 125,000 fingerlings of different species of fish.

He recalled that between 1998 and 2016, he introduced animal husbandry in the farm with 614 cows, a piggery and poultry.
He regretted however, that due to poisoning of the consumption water for the cows by some unknown persons, in less than two days he lost over 412 cows, a development that compelled him to divert attention to fish production.
“We have never had any financial support from the Bayelsa Government. Not even a dime has the state Ministry of Agriculture or other government own Agriculture related agency given to support our efforts.
“I have severally applied for government’s support, in terms of agricultural loans, but the government has not given me anything even as we speak. I have over 40 staff working on this farm.
“If I hadn’t brought you people to this farm today, I believe you would not have believed that we have a farm as big as this in Nembe.
“Already somebody is on his way coming from Port Harcourt to begin the modalities for operationalization of the hatchery.
“We are doing these so that we don’t depend on the ones coming from outside Bayelsa State. The fish feeds are now so expensive, we spend a lot on it,” Oruge added.