“It is unfortunate that the Customs do not follow the rule of law. Before the VIN valuation commenced, we were requesting an extension of time of 90 days to allow us to evacuate those vehicles, due to improper sensitisation by the Customs. 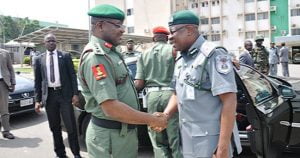 The Association of Nigerian Licensed Customs Agents (ANLCA), on Wednesday, lamented the poor start to the 30-day window for the evacuation of vehicles trapped in the ports, issued by the Customs service.

The vehicles were trapped due to the agitation of the agents against the Vehicle Identification Number (VIN) Valuation policy introduced by the NCS.

Mr Michael Imonitie, Secretary, ANLCA TinCan chapter, told the News Agency of Nigeria (NAN) that the vehicle evacuation exercise did not start smoothly as it was faced with some challenges.

According to Imonitie, the Customs did not give the directive on the modus of payment concerning values to be used for the evacuation.

“It is unfortunate that the Customs do not follow the rule of law. Before the VIN valuation commenced, we were requesting an extension of time of 90 days to allow us to evacuate those vehicles, due to improper sensitisation by the Customs.

“After the town hall meeting, it took the Customs almost one week to come up with the resolution based on the meeting and when they finally met on March 7, they decided to give 8th for vehicle evacuation to commence.

“From that very day, the Customs were having challenges of having a uniform value to be used by all commands starting from Apapa, TinCan and Port and the Terminal Multi-services Ltd. (PTML) and extending to all the bonded terminals like Classic, Clarion.

“Now, it took the additional two-days for them to meet, not until March 10 that they started issuance of valuation,” he said.

Imonitie said that Five Stars Logistics Terminal gave concession that those vehicles that were already released and trapped had agents written the Terminal Delivery Order (TDO) to just take their consignments and leave.

He said that those that had not written TDO would collect debit notes that had a 70 per cent waiver.

Imonitie added that even with the commencement of the exercise, they noticed that the Customs did not go back to the status quo as some vehicles had an added value ranging from N20,000, N50,000 and above.

“This new development is just to cause chaos within the system again. They are telling us that they have not still arrived at a benchmark on what value should be issued.

“We are now asking them, why don’t they go back to status quo and all commands to come together and use the same template,” he asked.

He said that agents had been taking their delivery, adding that the impression from the Customs was that they would be working on Saturdays and Sundays to help meet the deadline.

“But, we believe that by the time normalcy returns let’s say in two weeks’ time, and see how far we have gone, I believe that there will be nothing stopping us from going for an additional extension of days.

“We have to see that people comply first, key into it before we start any form of agitation on the date and timing given.

“We all know that 30 days is not enough for more than 12,000 vehicles trapped in the terminal. Even now PTML alone has up to about 16,000 vehicles for us to talk about TinCan and Apapa,” he said.

Mr Peter Akintoye, an ANLCA member, noted that vehicles trapped at the terminals were coming out gradually, only that they were faced with challenges of shipping lines not wanting to give waivers.

He added that on the 30-day window given by customs, they are waiting patiently to see improvement in evacuation.

He said that if by the next 20 days they see that it could not be feasible, they would meet the Customs in that regard.

Akintoye noted that it was unfortunate that the issue being debated upon had to do with vehicle values not conforming to the expectations of the value of the vehicles in question.

“When it comes to issues of price, there is provision, guidelines. The condition of the vehicle will determine the price that is how it is.

“The prices cannot be the same and that is why we are saying that the Nigeria Customs should put professionalism in what they do.

“Before now, we use to have an evaluation officer and it is that officer that will give the condition of these vehicles and say the actual value and that value should not be queried by anybody.

“But, what we see this day is that the value will be given to you and the person giving it out cannot defend what is given out. And that is why we are seeing all these things,” he said.

He decried targets given to customs by the federal government, stating that it would make them meet that target through any means which may not be favourable to agents.