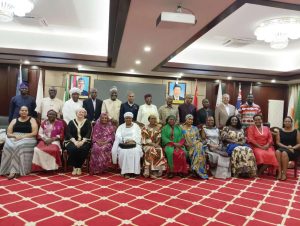 Amb. Martin Mpana, Dean of the Group of African Ambassadors and Ambassador of Cameroon to China, has extolled Nigeria’s leading role in deepening diplomatic relations among Africans.

Mpana said this while commending Amb. Baba Ahmad Jidda, Ambassador of Nigeria to China, for the initiative to host all new African Ambassadors and their spouses at the Nigerian embassy in Beijing.

He said, ”You did well not just to have invited our spouses, but outstanding figures among us to gather together.

“Thank you because you filled the gaps we had since November, 2021; after FOCAC many colleagues left and the African group did not do much formally in the meantime.

“Many colleagues assumed duties but that is not enough, we can do better, in fact the African group thought it could organise cocktails to welcome newcomers and bid farewell to those departing.

“The situation has changed since the outbreak of COVID-19, because nobody can predict what he can do tomorrow or day after; meetings in Beijing are sometimes prohibited and travel is not always possible.

“In those circumstances, to call for a meeting with 54 full members, even with their spouses to be in the same hall, sometimes poses difficulties, because of the need for authorisation from Beijing Municipal Government.

“So, understand that we can not perform the ways we wished, this is not the time we are doing it and we are happy Nigeria could offer its structure to host all meetings of Ambassadors and their spouses.” he said.

The dean described the group to be a pan-African family that works, interacts and often meets in Beijing.

He urged the diplomats to do their best professionally and take advantage of their duty to work closely for the benefit of Africa.

Jidda, the host, said the event was a collective dinner for the new ambassadors and their spouses and to welcome them into the African family in Beijing.

Jidda said, “This event is in honour of our new ambassadors and their spouses; it also happens to be the Chinese Mid-Autumn Festival, so we celebrate with the people of China.

“Moreover, Sept. 10 was the 20th anniversary of diplomatic relations between China and the African Union (AU), so it is a three-in-one event.

“The presence of spouses is not by accident; African diplomat spouses have ways of choosing their leaders yearly and my wife is the president of Wives of Ambassadors’ Spouses in Beijing.

“Therefore, we cannot do anything like family reception without the presence of our spouses,” he said.

In his remark, Mr Rahamtalla Osman, the Ambassador of AU, urged the participants to abide by the group’s collective decision to hoist the national flag and AU’s flag at their diplomatic premises.

“We should abide by the decision for our interest; we did not celebrate the AU Day because we have only one day designed for that, which is May 25 of every year.

“All our countries in Africa celebrate the African Day, because that is when the original organisation started, which was Organisation of Africa Unity (OAU).

“The AU is just a by-product of that organisation, which had been for a long time; so in September we commemorate the day by issuing statements that summarise our achievements,” Osman said.

The envoy mentioned implementation of decade of Agenda 2063 Agreement in 2023 to be notable achievement so far recorded, amidst COVID-19 pandemic, saying more could be done.

In another remark, Mr Siddharth Chatterjee, Coordinator of the United Nations Development System, assured to support programme initiatives towards infrastructure development in Africa.

“Count on me and the whole UN Country team to be of full support to you; as you start discussion, think of ways to attract more private-sector investments to be driven towards your countries.

“Those are initiatives we have already started to embark on; I will continue to host separate Africa-based fora like the one we did with the African Ambassadors Group for implementation.

“We will fully be there to support you with every possibility, so you count on that,” Chatterjee said.

On his part, Mr Ibrahim Sory Sylla, Co-Chairman of FOCAC and Ambassador of Senegal, who spoke on behalf of the new ambassadors commended Jidda for his fatherly role in the country.

“On behalf of the new ambassadors, I express appreciation to you; this is an added value for us in China, a country amazing in terms of positive perspectives for Africa.

“In terms of visibility of Africa, I think we are in a country that is willing to cooperate with us; we must stay and act together, whatever we do, we do it together and that is what we believe.

“We did a lot at the level of Africa, we can move forward if you want to deal with issues regarding development of Africa,” Sylla said.