Sall said the establishment of the energy bank was in support of an African-led energy transition strategy. 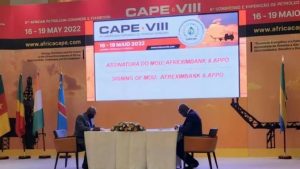 This is contained in a statement signed by Afreximbank’s Media Contact,  Mr Amadou Sall, on Friday.

Sall said the establishment of the energy bank was in support of an African-led energy transition strategy.

He said the new institution would accelerate Africa’s economic development while ensuring the progress was compatible with and complementary to, the Sustainable Development Goals,

Sall said that the new bank would also ensure compatibility with the continent’s long-term social and environmental objectives as set out in African Union’s Agenda 2063: The Africa We Want.

He said that the bank would address an urgent and existential need on the continent.

“Africa stands to experience profound effects from climate change, while the considerable poverty across the continent further disincentivises a focus on environmental care and sustainability for many populations.

“While Africa’s transition towards alternative energy sources presents great opportunities for the continent, this transition must be carefully managed to minimise the short-term adverse impacts of the transition while maximizing its longer-term benefits,” he said.

Sall said the new bank’s responsibilities would include the management and encouragement of such a productive transition.

He said that APPO member states would be signatories to the Energy Transition Bank’s constitutional documents which would be structured in the form of a multilateral treaty, and invest equity into the new vehicle.

Sall said that Afreximbank would co-invest and advise on the establishment and implementation process.

The statement quoted Prof. Benedict Oramah, President of Afreximbank, as saying “we are delighted to be collaborating with APPO towards the establishment of the proposed African Energy Transition Bank”.

“These are challenging times when we must strive to strike the right balance between the imperatives of mitigating climate change and the urgency of averting social upheavals as a result of increasingly difficult economic and financial conditions in Africa.

“For us at Afreximbank, supporting the emergence of the African Energy Transition Bank will enable a more efficient and predictable capital allocation between fossil fuels and renewables.”

Oramah is quoted to have said that  establishing the bank would also free human and other resources at Afreximbank that would make it possible to support its member countries more effectively in the transition to cleaner fuels.

“We thank the members and leadership of APPO for their confidence in Afreximbank to support them as they embark on this very important initiative,” he said.

The statement quoted Dr Omar Farouk Ibrahim, APPO Secretary General, as saying,
“Today’s event marks the beginning of Africa taking its destiny into its own hands.”

He said Africans had come to believe that without foreign support they cannot make any progress in addressing these challenges on the African continent.

Ibrahim, however, said that the resolve to establish the bank evidenced in the signing of an MoU between the two African institutions was a clear indication of the changing orientation of Africans on how to address their challenges.

“How else do Africans expect to harvest the 125 billion barrels of crude and over 500 trillion SCUF of gas when the traditional financiers have decided to abandon the continent?

“How else do we manage the impact of climate change on the continent without the resources to make the investment?

“How else can we give access to energy to 600 million people on our continent who have no access today?”

According to Ibrahim, Africa is fully supportive of the fight against climate change.

“This is because we bear the biggest brunt and we contribute the least carbon emissions but we must engage in the fight in a collaborative and just manner.”