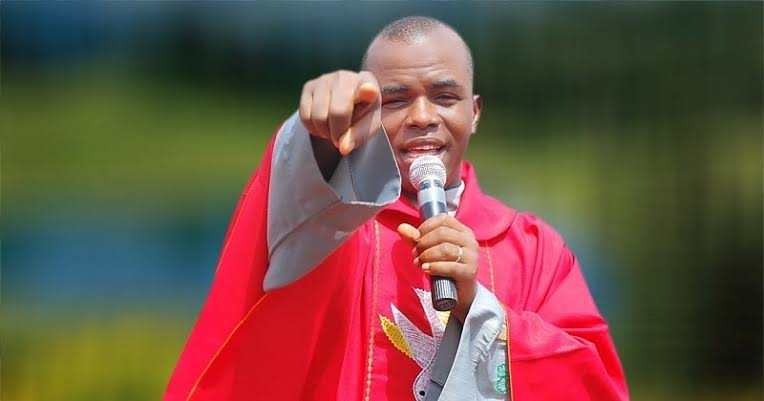 Enugu Diocese of the Catholic Church says Rev Fr Ejike Mbaka proposed that Rev Fr Anthony Amadi to serve as interim administrator for the Adoration Ministry, in the state.

Director of Communications, Enugu Diocese, Rev. Fr. Benjamin Achi, made the disclosure in Enugu on Monday while reacting to media reports that Mbaka who was the ministry’s administrator was removed by the church.

Achi said that Rev. Fr. Ejike Mbaka was not removed from the Adoration Ministry, as many reports were suggesting.

According to him, Enugu Catholic Diocese only recommended that Fr. Mbaka took time away in solitude, in order to listen to what the Spirit of God has to tell him.

“Mbaka was allowed to propose a priest to administer, in the interim, to the faithful at the Adoration Ministry.

“With the approval of his Bishop, on Sunday Oct. 2 2022, Fr. Mbaka introduced Fr. Anthony Amadi to the worshippers.

“Unfortunately, some people were still not pleased, and would prefer that Fr. Mbaka remains,” he said.

He stated that what every true Christian, and especially every true Catholic, should do at this moment was to “commit our dear brother and priest, Fr. Mbaka, to God in prayer.

“So that he may, through this moment, encounter God specially, come out stronger and better in recognizing His will for him and gain more graces to channel those rare gifts for His glory”.

This, he said, would help for the sanctification of the people of God and society at large.

Umoh further stressed that, “Church loves Fr. Mbaka and cherishes him as an illustrious son and may our Mother Mary, the Queen of all Apostles, intercede for him. Amen”.

News Agency of Nigeria (NAN) reports that following the lifting of the ban, Fr. Mbaka held a service at the ministry on Sunday amidst cheers by his followers.

The worshippers were, however, shocked when the cleric announced that he had been removed as the spiritual director of the ministry by the Catholic bishop, Most Rev Callistus Onaga.

He subsequently introduced Anthony Amadi, another Catholic priest, as the new spiritual director of the ministry.

Mbaka said he had been directed to “proceed to a monastery” as part of the disciplinary measures against him by the church.

“So, while I proceed to the monastery to continue with the remaining disciplinary exercises, as directed.

“I wouldn’t know how long; but the church has appointed Fr. Anthony Amadi, one of us, to be overseeing all affairs of the ministry, to be assisted by other priests, pending my return, by the grace of God,” Fr. Mbaka said.

The cleric also announced that the ministry had not fully reopened, explaining that some programmes including a weekly Friday all-night adoration remained suspended till further notice.