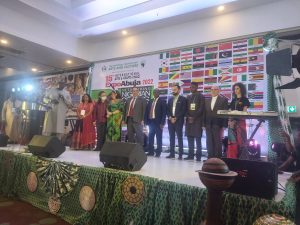 The 15th edition of the International Arts and Craft Expo (INAC) began on Thursday in Abuja with no fewer than 25 countries and eight states in attendance.
The expo which is to hold from Aug.18 to Aug. 20, has the theme: “Networking Nigerian Crafts to the World”.
Some of the countries in attendance include: China, Cuba, Spain, Mali, Tanzania, Iran, Phillipines, Trinidad and Tobago, Malaysia, India, Syria, Venezuela, Burkina Faso, Bangledesh, Soth Korea, Lebanon, Benin Republic, Sudan and Libya among others.
Participants from Kaduna, Lagos, Ogun, Katsina, Akwa Ibom states and the FCT were also in attendance.
Chief Olusegun Runsewe, Director-General, National Council for Arts and Culture (NCAC), convener of INAC, said that the essence of the expo was to ensure Nigerian crafts are better projected to various countries of the world.
Runsewe said that it was also meant to promote cultural exchange programmes, improve inter-country collaborations in music, arts, drama and all.
According to him, the expo will feature skill acquisition training for the youth, free medical examination and care, display of countries art documemtaries, exhibitions of countries’ arts, crafts and all.
“This is another opportunity we have to showcase Nigerian crafts to the world and to let the world know that Nigeria is a safe place to be.
“We want Nigerians to know that the creative industry is capable of tackling Nigerian insecurity problems by engaging the youth in our crafts for revenue generation,” he said.
Some of the exhibitors who spoke with the News Agency of Nigeria (NAN) commended the organisers of the expo and revealed their expectations.
Mrs Yadavi Ritu-Martin, an exhibitor from India, said the main aim of participating in the expo was to learn from Nigerian culture and other countries.
Ritu-Martin said that fabrics from the 31 states that make up India were exhibited as well as household handmade utensils made with copper, brass and silver.
Another exhibitor from India, Reena Saini, said she had come to showcase and create awareness on the efficacy of Indian traditional medicines known as “Ayurveda”.
Mr Adeeb Al-bodi, Cultural Officer, Syrian Embassy, said Syrian handcrafts ranging from home decoratives, kitchen utensils and body ornaments were on display.
Albodi commended organisers of the expo for a well organised environment.
He said some of the country’s crafts displayed were: Ibri Shayi- a cup specially made for tea consumption; Samawar- material for home decoration; Dhawulat Zahan – an imitation of chess games and many other items.
READ ALSO:https://brandpowerng.com/kizz-daniels-arrest-bbns-beauty-disqualification-top-social-media-trends/
Mr Mishaal Khadr, Economic Attachė, Lebanon Embassy, said he had always been intrigued with countries and states’ participation in the expo.
Khadr noted that Lebanon was participating to showcase the country’s old history in arts and crafts.
He said the country was also out to market its  organic olive oil soap which had lots of benefits to the skin, acting as antioxidant and more.
“We have our handmade aluminium plates, home decoratives, modern boxes, organic soap made with 100 per cent olive oil, we intend to make sales and create awareness for most of the products displayed.
“Lebanon and Nigeria have some similarities in culture, we have experienced lots of inter-marriages, we are looking forward to strengthening our relations.
“I love Nigeria and what I will be taking away from here is Nigerian good food and beautiful music,” he said.
The delegates and exhibitors were thrilled as local artistes performed to their delight.
(NAN)
Sign in
Welcome! Log into your account
Forgot your password? Get help
Password recovery
Recover your password
A password will be e-mailed to you.