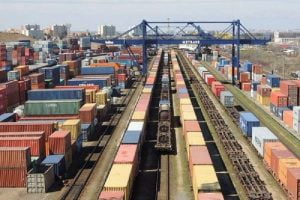 The Commissioner for Transport in Abia, Chief Godswill Nwanoruo, says the state is awaiting the Debt Management Office’s (DMO) nod to start construction work at the Isiala Ngwa Dry Port.
Nwanoruo disclosed this in an interview with the News Agency of Nigeria (NAN) in Aba on Wednesday.
He was reacting to the claims by the Concessionaire of the Dry Port, Dr Kingsley Usoh, that the State Government was responsible for the delay in the commencement of the project.
Usoh had told NAN in an interview that his company had done everything possible to ensure work began on the project but that “some persons in government” were stopping it.
“We have done everything humanly possible, more than Kaduna and others did but the problem is with Abia Government.
“The dry port will generate about 1.5 million jobs, when completed.
“This should motivate any government to ensure it succeeded but that is not the case with Abia,” Usoh said.
But Nwanoruo denied the allegation, saying that the state had done what was expected of it to enable work to commence on the project.
READ ALSO:https://brandpowerng.com/nog-conference-participants-stakeholders-mourn-barkindo/

“What is left is not in Abia Government’s hands,” the commissioner said.
He further said that the concessionaire needed the State Government to send the House of Assembly Resolution on the dry port with other necessary documents to the DMO in Abuja.
The commissioner said that the Attorney-General of the state confirmed to him that the Commissioner for Finance had sent the documents to DMO.
“I pray that in the next few weeks we can get the reply from DMO so that we can now move into the site.
“We really want that dry port to start working because it will help not only Abia but the South-East in the businesses,” he said.
He further opined that the dry port would help to decongest the Apapa Port in Lagos, when completed.