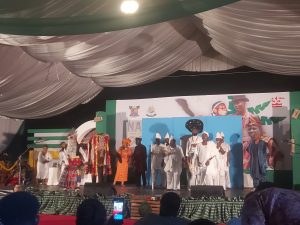 The Lagos State Council for Arts and Culture on Monday had a command performance of cultural display and stage play, to herald the 35th edition of the National Festival of Arts and Culture (NAFEST).
The command performance held at the National Institute for Sports, Surulere, venue for the festival.
The play, titled ‘Osusu’, harped on the need for Nigerians to consciously work toward living together  peacefully.
Osusu, in Yoruba language is symbolic, and  means bunch of brooms that can be difficult to break. This was likened to the way Nigerians must remain united.
The performance had the cast render music in different indigenous languages, sensitising Nigerians to jettison greed, pride, nepotism, moral decadence and kidnapping, as well as to embrace unity and peace.
The play also focused on the importance of hardwork, honesty, sincerity and imbibing the nation’s beautiful, unique and rich culture. Earlier, Chief Olusegun Runsewe, Director-General, National Council for Arts and Culture (NCAC),commended the morals projected in the play.
Runsewe noted that there was great need for Nigerians to do everything within their power to ensure the unity of the nation.
“I  am grateful to the Lagos State Government for the hospitality so far and the message conveyed in the play, we should all know that we do not need to fight one another,” he said.
Editor’s Picks  Phyna wins BBNaija Season 7, N100m grand prize