She said that investing in youth leadership would help them in mobilising their peers to participate in election peacefully. 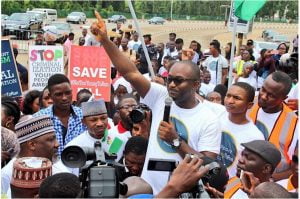 Yiaga Africa, an international NGO, has urged youths to ensure that they fully engage their communities by supporting young candidates and mobilising people to register and vote in the general elections.

The News Agency of Nigeria (NAN) reports that the organisation made the call at an ongoing four-day Community Organising Training (COT) in Lagos on Tuesday.

The training was organised by Yiaga Africa in collaboration with UK Aid, to build a generation of young leaders who will help to increase youth participation and votes during elections in the state.

According to the Director of Programmes at Yiaga, Cynthia Mbamalu, the idea of the COT is to build young civic actors and political leaders especially in the pre-election phase toward the general elections.

She said that investing in youth leadership would help them in mobilising their peers to participate in election peacefully.

Mbamalu said the participants were expected to go back to their communities, after the training, to bring about a sociopolitical change by supporting young candidates and youths to vote.

She said though the state had the most number of registered voters, it still suffered the challenge of low voters’ turnout.

“INEC’s recent data on the Continuous Voter Registration shows that young people are about 78 per cent of the new registered voters.

“If the young people are constituting the higher percentage of the registered voters but they are not engaging and not voting, it means that numerical strength is not transforming into political power to influence the outcome.

“We want to build on that vibrancy within the youth population in Lagos to actually begin to support that process that gets them to start coming out to vote,” Mbamalu said.

She decried the role of money in the election process, saying that it prevented those with the right mindset and capacity from getting involved.

Board Member, Yiaga Africa, Mr Ezenwa Nwagwu, cautioned youths against the sense of entitlement and intellectual laziness but encouraged them to strive toward acquiring knowledge.

He said when like-minded people come together with one goal in mind, adding their little contributions, they would be able to overcome the obstacles confronting them.

“Doing the work of impacting society will not have to be in big things, it can be small things in the communities.

“Democracy is much more than a form of government, it’s about a society; how we organise ourselves for a social change,” he said.

Nwagwu urged youths to stop complaining but rather take up the responsibility of transforming the nation.