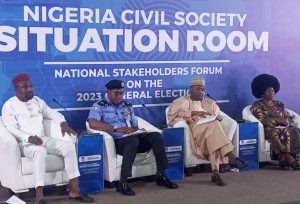 Prof. Mahmood Yakubu, INEC Chairman said the commission has made tremendous progress in the production and delivery of critical non-sensitive materials ahead of the 2023 general elections.

Yakubu disclosed this at the Nigeria Civil Society Situation Room National Stakeholders Forum on Elections supported by the UK Foreign, Commonwealth and Development Office (FCDO), on Wednesday in Abuja.

He said that with about three months to the polls and based on the 14 activities listed in the Timetable and Schedule of Activities released by the commission on Feb. 26, nine had so far been implemented.

Yakubu said:“ Similarly, we have made tremendous progress in the production and delivery of critical sensitive and non-sensitive election materials to our State offices, recruitment and training of ad hoc staff for the election are ongoing.

“On electoral logistics, particularly the arrangements for the movement of personnel and materials to various locations during elections, the commission had met again with the service providers.

“We have reviewed the Memorandum of Understanding (MoU) with the road transport unions.

“Arising from our experience in previous elections, the commission has expanded the scope of collaboration to include the marine union for the riverine areas.

“Very soon, the revised MoU will be signed with the service providers to cover both land and maritime transportation.”

Yakubu, however, said the commission has said repeatedly that the perennial insecurity in the country was a source for concern.

He said that the existing challenge was being compounded by the unfortunate incidents of attacks on campaigns, rallies and processions across all political parties.

According to him, the commission is determined to tackle the matter of campaign finances frontally.

Yakubu listed the areas of violation to include: Parties’ and candidates’ expenditures beyond what was provided by law and the obnoxious practice of vote buying at polling units on election days.

He added:’`Beyond that, we are mobilising every national institution with the responsibility for tracking and combating the illicit flow of funds as well as the broadcast and print media regulatory agencies to confront the problem head-on. ‘’

Yakubu said that the Electoral Act 2022, required the commission to deploy technology on election days for voter accreditation and the upload of polling unit results to the INEC Result Viewing (IReV) portal.

He said the processes would be achieved through the use of the Bimodal Voter Accreditation System (BVAS) and reassured Nigerians that the BVAS has come to stay as the only means of voter accreditation.

Yakubu said:’`For the last two years, the commission had published results direct from polling units in 105 off-cycles governorship and bye-elections in real-time and the results can still be viewed on the IReV portal.

“The 2023 general elections will not be different. There is no truth in any insinuation to the contrary.”

On collection of Permanent Voters Cards (PVCs),Yakubu said for fresh registrations in 2022 as well as applicants for transfer to other polling units and the replacement of damaged or lost cards, the commission would soon release the timelines and procedure for the collection of PVCs.

The Convener, Situation Room ,Ene Obi,said the Situation Room represented Civil Society Organisations at the fore of working to strengthen democracy in Nigeria.

Obi said the interventions of the Situation Room as a platform and those of its partners organisations have contributed tremendously to the improvement of the electoral process, holding stakeholders accountable and enlightening citizens.

She said that this had been with the support of development partners desirous of seeing an improved electoral process in Nigeria.

According to her, in 2021, the Situation Room launched its Credibility Threshold for the 2023 general elections for the second time,the first having been issued in the 2019 polls.

She said the document, which outlined minimum standards that the election needed to fulfil to be regarded as credible would be the basis by which Situation Room would analyse the 2023 polls.

Obi said although,the coalition was pleased to see several improvements in the off-cycle governorship elections that had been held since the 2019 general elections, there were still several challenges of utmost concern.

She said: “This year’s stakeholders forum on elections is focused on the Role of Stakeholders in Ensuring Free, Fair, Peaceful and Credible Elections.

“The fact that the 2023 general elections will take part in this context of a grave security crisis is of huge concern.’

Obi said that the group was using the platform to canvass for improved electoral system and hoped to see a better electoral environment ahead of the 2023 general elections.

Drew said: ‘`The UK stands ready to continue to support INEC and all relevant actors in efforts to effectively execute the polls within this context.

“We are proud of our long-term partnership and support for INEC as it has worked to continue to improve the electoral system and of our decade-long support to the Situation Room that has allowed the active participation of citizens.

“It is fundamental to that process that citizens are able to turn out and exercise their franchise in a peaceful and conducive environment.

“As the largest democracy in Africa, Nigeria’s leadership on electoral reform and practice is important for the continent and beyond, other countries look to Nigeria on democracy issues.’’

Drew, therefore, said that the execution of the 2023 polls would be a significant milestone in this respect.

The Inspector-General of Police, Usman Baba, represented by ACP Onaghise Osayande ,said the force was working to guarantee an enabling environment for the conduct of the 2023 elections.

Baba, however, said that with synergy with other stakeholders, the elections would be free ,fair and credible in a peaceful atmosphere.

He said that nobody was above the law ,and the force would prosecute electoral violators within the police.

The I-G added, “by the grace of God, the elections will be free and fair and there will be no need to prosecute any officer because they will all behave well.’’