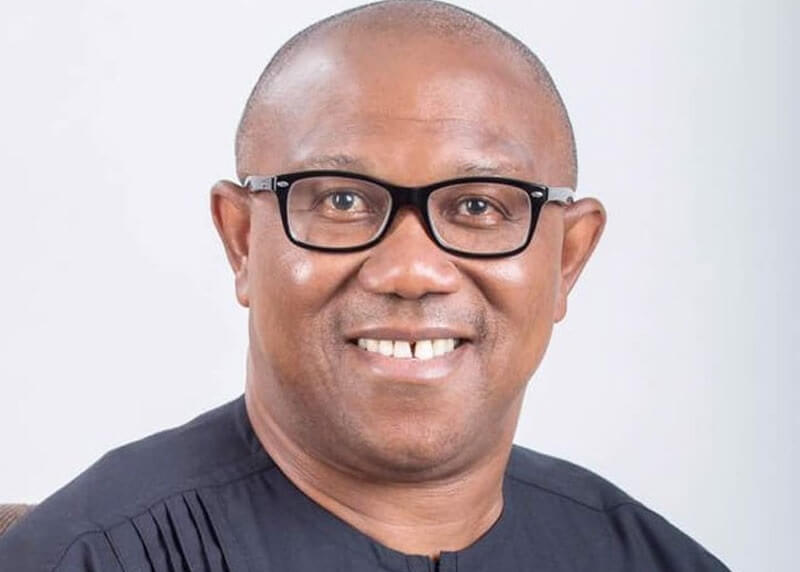 Peter Obi of the Labour Party is in good stead to win the presidential elections if the polls are held about now. This is according to an opinion poll conducted by NOI Polls.

Ahead of the forthcoming 2023 Presidential elections, a recent nationwide opinion poll commissioned by Anap Foundation and conducted by NOI Polls Limited was concluded in early September 2022. 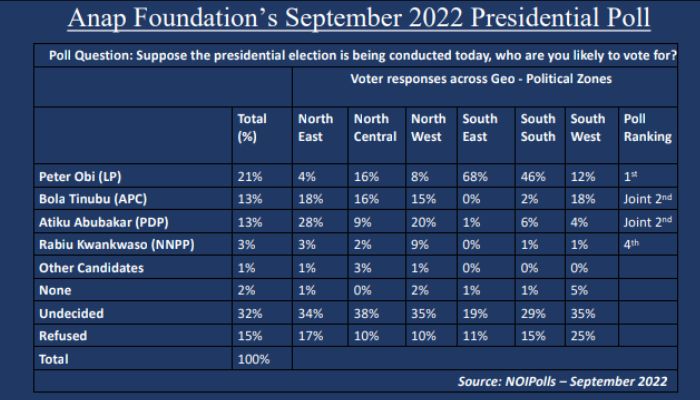 Mr. Peter Obi’s 8 percentage point lead at this early stage is significant, but not sufficient to separate him completely from a leading pack of candidates scoring 21%, 13% and 13%  respectively.

Undecided voters and those who prefer not to reveal their preferred candidate add up to a whopping 32% and 15% respectively. The gender split of undecided voters shows that 39% of women are undecided versus 27% of male voters.

Furthermore, the data summarizes top five reasons why voters are more inclined to vote in the forthcoming elections, these include: – The need to tackle insecurity (45%), the Economy (20%), Education (9%), Unemployment (7%) and Poverty alleviation (4%).

46% of the respondents would love to see their preferred Presidential candidates participate in a televised interview and/or debate, with the interview/debates spanning across topics like their party manifestos, issues of Security, Economy, Education, Job Creation, Healthcare and Agriculture amongst others.

It is worthy of note that 69% of those aged 18-25, 76% of those aged 26-35, 77% of those aged 36-45, 87% of those aged 46-60 and 89% of those aged 61+ responded saying that they would definitely vote in the coming elections. The age groups that expressed the greatest willingness to vote were those between 46-60 and 61+ years. On average, the Poll shows that almost 8 in 10 registered voters are absolutely certain that they would be voting in the next presidential election. If they stay committed then we could witness a huge turnout in the February 2023 elections. Furthermore, Mr. Peter Obi led the pack in virtually all the age categories i.e. his leadership was not confined to the youths only.

While these Poll results show some significant trends, it is key to note that the battle ahead lies in the hands of the undecided/swing voters, as it appears they would ultimately decide which candidate takes the lead to emerge as the President of the Federal Republic of Nigeria in the 2023 presidential elections.

In summary, our September 2022 Polls are inconclusive in terms of establishing a clear winner, as the undecided voters are large enough to turn the tables. However, Anap Foundation has concluded that the trends are clear enough to establish the front runners and so our subsequent polls will concentrate on the 4 leading candidates only.

NOIPolls Limited is the acclaimed No.1 for country-specific polling services in West Africa. It conducts periodic opinion polls and studies on various socio-economic and political issues in Nigeria.