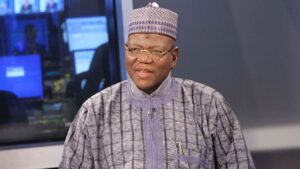 The Gubernatorial candidate of the Peoples Democratic Party (PDP) in Jigawa, Dr Mustapha Sule Lamido, on Tuesday expressed readiness to form government of unity and develop digital economy if elected in 2023.

Lamido, the son of the Jigawa ex Governor Sule Lamido, made this known while addressing the party’s supporters at the inauguration of 2023 campaign for all PDP candidates in the state in Dutse.

The PDP governorship candidate also pomised to declare state of emergency on unemployment if elected, with a view to revolutionise the agricultural sector.

He said the target was to bridge the unemployment gap and propel economic development.

He said that he was considering a government of unity in the state by bringing people, irrespective of their parties, among the political actors,  to unite the Jigawa people and pave the way for drastic collective development.

Lamido announced that his administration, if given the mandate by the electorate, would also use national and diplomatic influences to woo more investors into the state as it were when PDP was the state’s ruling party.

He said the Jigawa people needed to open their eyes and elect a modern, transparent and young leader who had the capacity to key in the state into digital environment and meet up with the demand of digital governance.

The PDP governorship candidate said if elected, he would provide such leadership qualities and also provide skill-based education and develop the agricultural and ICT sectors to tackle unemployment challenges.

He, therefore, called on the youth and women, who were the major victims of unemployment, to give him and all other PDP candidates the necessary support to achieve their objectives.

He, however, canvassed support for the PDP Presidential candidate, Alhaji Atiku Abubakar, and urged the party loyalists to campaign for Abubakar.

He said that if Abubakar was returned elected in 2023 as Nigeria’s next president, he would lead others to bring in prospective investors in the state.

He explained how the ruling PDP was able to achieve a lot in Jigawa, adding that the good days would still come to them if it formed government at the state and federal levels.