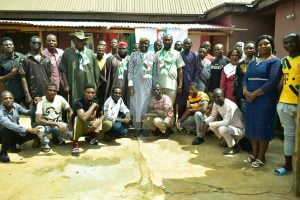 The Labour Party (LP) at Gaube electoral ward on Monday, received over 200 defectors from both the Peoples Democratic Party (PDP) and All Progressives Congress (APC) in Kuje Area Council, FCT.

The defectors, who handed over their APC membership cards, posters, brooms and the umbrellas of the PDP, said the move had become necessary for true democracy to thrive in the country.

Mr Fanimi Oluwabusayo, the FCT Auditor of the Party, while receiving them assured that the party had come to deliver Nigerians from the hardship the two major parties had put Nigerians.

Oluwabusayo, who is also known as Biggy, said “Labour Party is coming with full force to change the narrative of democracy in the country.

“I want to enjoin Nigerian youths to go and verify our candidate and to also come out en-mass to vote for reliable candidate come 2023.

“We enjoin you all to join this force and bring positive change and move Nigeria to a better height to end poverty and suffering in the country,” he said.

Mr Abu Tanko, who spoke on behalf of other defectors, told the News Agency of Nigeria (NAN) that they were dissatisfied by the approach and policies of both the APC and PDP.

The Chairman of Kuje Labour Party, Mr Oguh Hyginus said more defectors were still coming to the party before the 2023 general elections for the development of democracy in the country.